Calls for Freedom of Roscommon for artist Brian O’Doherty (89) 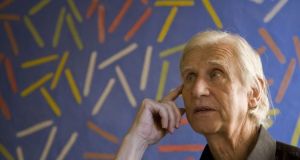 A letter has been sent to the chair of Roscommon County Council asking that the freedom of the county be bestowed on artist, doctor, and Booker-shortlisted author Brian O’Doherty (89), who was born there.

In an interview with The Irish Times last month Mr O’Doherty said “Ireland does not appreciate its foreign achievers. It’s kind of an insult if you achieve. You’re supposed to fail and then you’ll be adopted.”

Born in Ballaghaderreen in 1928, he studied medicine at UCD, Cambridge, and Harvard before moving to New York where he devoted himself to the visual arts.

He presented two public television series on the arts American Masters and Great Performances in the US and wrote The Strange Case of Mademoiselle P. (1992), the 2000 Booker prize-nominated The Deposition of Father McGreevy (1999), and The Crossdresser’s Secret (2014).

He is probably more widely known in this country as Patrick Ireland. In 1972, at Dublin’s Project Arts Centre he was reborn as “Patrick Ireland” in protest at the Bloody Sunday killings in Derry that year.

Dressed in white he was doused in green and orange pigment by fellow artists Robert Ballagh and Brian King before an audience of 30 invited witnesses.

In 2008, given the peace process, he ceremoniously buried Patrick Ireland at IMMA and resumed his birth name.

A letter detailing Mr O’Doherty’s many achievements has been sent to Cllr Orla Leyden asking that he be granted the Freedom of Roscommon. It is signed by artist Robert Ballagh, academic Prof Luke Gibbons, head of collections at IMMA Christina Kennedy, Trinity College art historian Dr Brenda Moore McCann, and Michael O’Dea of Rathmines College.