Call for an end to Presidents taking religious oaths 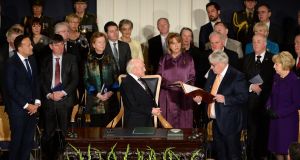 Atheist Ireland on Sunday launched its “One Oath For All” campaign to enable conscientious atheists to hold the offices of President, judge, and Taoiseach, as well as become members of the Council of State, by removing religious elements from the oaths for office.

In 2014 the UN Human Rights Committee called on the State to remove both the religious oaths for public office and the law on blasphemy.

Launching the new campaign, Atheist Ireland chairman Michael Nugent said that “today Michael D Higgins will begin his second term as President, after 14 elections or uncontested nominations since 1938, all of which have excluded conscientious atheists as candidates”.

In order to take office as a President, judge, or Taoiseach, “we would have to swear a religious oath that would force us to dissemble about our beliefs, and breach our human right to freedom of conscience and belief”, he said.

“We want a referendum to replace these religiously discriminatory oaths in our Constitution, so that all citizens of our Republic can be treated equally regardless of their religious or nonreligious beliefs,” he said.

Such holders of public office “should instead make a single declaration of loyalty to the Irish Constitution, State, and people that does not reveal anything about the person’s religious or nonreligious beliefs”, he said.

At his inauguration for a second term as President on Sunday evening, Mr Higgins took the oath as determined by Article 12 of the Constitution.

“Described as a declaration, it is clearly a religious oath. It is a solemn promise, invoking a divine witness described as Almighty God, regarding the President’s future action or behaviour, and asking Almighty God to direct and sustain him or her,” said Mr Nugent.

“If instead, in order to become President, the Constitution required that a winning candidate had to swear that there is no God, everybody would immediately realise that this would be a breach of their rights. But there is a blind spot when the discrimination is the other way around,” he said.

A similar religious oath exists for judges through Article 34, as well as for members of the Council of State.

The Constitution of a republic “should not give preference or privilege to the beliefs of either religious or atheist citizens”, said Mr Nugent.

“We have removed the law against blasphemy, and we should now replace the religious oaths.”