The Irish Times view on Budget 2021: a delicate balancing act

For now there is really no choice but to keep supporting the economy, business, jobs and incomes insofar as possible 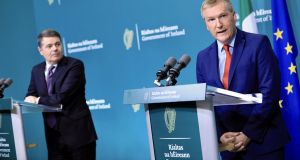 The Government has scope in the budget next Tuesday to keep supporting the economy through the pandemic emergency. The cash is not limitless, of course, but pre-budget figures show that there is room for manoeuvre, albeit involving continuing to borrow very large amounts of money.

Minister for Finance Paschal Donohoe and Minster for Public Expenditure Michael McGrath announced on Friday that before any budget measures, the gap between spending and revenue next year would be about €14.5 billion. With a deficit this year of just over €21 billion – assuming no further public health restrictions – it is possible to allocate extra cash in the budget, while still setting a target for borrowing next year which is below this year’s level.

This needs to be put in context, of course – borrowing will still likely be 5 to 6 per cent of GDP next year.

This all assumes that the virus emergency does not deteriorate significantly. The Ministers announced that a scenario for 2022 based on a more severe outcome would also be published, alongside the core forecasts in the budget. This makes sense and will likely underline the severe budget consequences of wider restrictions. McGrath pointed out that the cost of wage and income supports in the early days of the crisis ran to around €200 million each week, so budget figures could quickly be under pressure if there were a prolonged shutdown.

The precise way the cash will be allocated is not clear, but the outlines are generally coming into view. There will be an additional boost to capital spending, above the €1 billion further increase already allocated. A sizeable amount of money will be set aside to deal with the fall-out from Covid-19 – above and beyond the €8.5 billion which will be the carry-over cost of this year’s measures in that area. Much of this will be in a new recovery fund, some of which will be allocated to specific purposes and some left to be dispersed depending on how the virus – and the Brexit story – plays out.

Budgeting against such uncertainty is very difficult – indeed it will be impossible to be precise. So it makes sense to set the targets on the basis of a conservative viewpoint – on both the pandemic and Brexit – as the Government will try to do. There is a strong case to continue high levels of spending on business and income supports. And 2021 is not the year to be increasing the general level of taxation, even if some revenue-raising measures will be considered.

The two ministers face a delicate balancing act. Above all, they do not want to see their forecasts going way off track next year. There is inevitable risk in what lies ahead for the public finances. But for now there is really no choice but to keep supporting the economy, business, jobs and incomes insofar as possible.