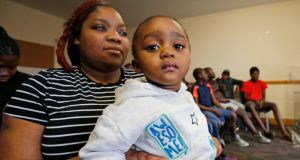 Asylum seekers at a direct provision centre in Dublin, due to close before Christmas, say they are “shocked”, “scared” and “really down” at the prospect of losing their homes.

A total of 225 residents at Clondalkin Towers in west Dublin, the largest direct provision centre in the capital, found out on Friday night the company managing the centre was pulling out on December 3rd.

Some 80 of the residents have refugee status and face having to source accommodation in the private rented sector using the Housing Assistance Payment. The remaining 145 will likely be dispersed to other direct provision centres around the State.

About 30 gathered in the former hotel to tell The Irish Times their concerns for the future.

Jalomi Ofioritse, from Nigeria, has been here for 10 months with her five children, aged between four and 11. They are all in the local Scoil Mhuire national school, where she says they are settling in well.

“They are not happy at leaving their friends. It was hard for them to adapt and moving again is not going to be easy for them,” said Ms Ofioritse, who is doing a course locally in special needs care. “I am very worried.”

Another woman, who is from Zimbabwe but did not want to be named, described how she miscarried twin girls in May at five months. They are buried in Glasnevin cemetery. “I am still going to counselling in the Coombe. I bring my little girl to the grave to see her sisters. I do not want to move out of Dublin. I am used to my counsellor. It is very important to me to go to the grave.”

It was too hard to get a school. I feel so bad. If we have to leave we will not get another school

Ahmed Usmanjidda, from Nigeria, has been at Clondalkin Towers since March with his wife and five children. The children could not access a school until September and described how “hard” it was being out of school for six months.

His daughter, Hauwa (17), just started at Coláiste Bríde. “I really don’t want to move. I love the other kids, the teachers. I am so upset about this. Since Friday I cannot sleep and my tears are flowing all the time.”

Her bother, Usman (15), says: “It was too hard to get a school. I feel so bad. If we have to leave we will not get another school”.

Clondalkin Towers is the third direct provision centre to close in Dublin since the start of 2018. Two in the city centre closed in February and July, housing 80 and 52 people respectively.

Nick Henderson, chief executive of the Irish Refugee Council, said the situation underlined the need to move away from private businesses providing direct provision to a planned model delivered by non-profit bodies with expertise in housing and supporting vulnerable people.

A spokesman for the Department of Justice said the Reception and Integration Agency (RIA) will meet the centre’s management this week and will keep the welfare of all residents at the centre of the discussions. “As soon as that meeting is concluded, RIA will be writing to all residents to advise them of the next steps.”

Shooting of farmer by British army in 1974 ‘unjustified’, coroner rules