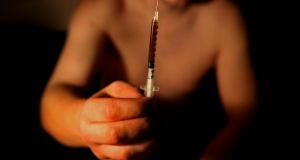 Decriminalisation would not apply just to the “stereotypical problem user that everyone has a mental image of”, says Marcus Keane, but “the entire country”. Photograph: Julien Behal/PA Wire

Decriminalisation of drugs for personal use would benefit middle-class, occasional users of cocaine as much as it would entrenched heroin or crack-cocaine addicts from deprived areas, the co-author of a new report on the issue stresses.

Marcus Keane, head of policy at the Ana Liffey drug project in Dublin and Limerick, hit out at some who have described the proposed decriminalisation of possession of small quantities of drugs as a “free for all” for drug addicts.

Decriminalisation of drugs for personal use is being considered by a working group expected to report to Government early next year.

“When we look across Europe and the world we see a broad move towards decriminalisation,” says Mr Keane. “We are not talking about a free for all. What we are talking about is very discreet and it’s that if someone is caught with drugs for their own use it’s currently a crime [and] we’re saying it shouldn’t be.”

The report, Not Criminals. Underpinning a health-led approach to drug use, will be published at an event on Monday at which Dr Nuno Capaz, vice-president of Lisbon’s “dissuasion commission”, will outline Portugal’s experience following the decriminalisation in 2001.

In Portugal, when a person is found in possession of a small quantity of drugs, they are summoned before one of the country’s 18 dissuasion commissions. These are made up of three people – a social worker, a psychiatrist, and an attorney – and have sanctions open to them including fines, bans on visiting certain places or spending time with certain people, and, in the case of addiction, of referring for treatment.

Decriminalisation would not apply just to the “stereotypical problem user that everyone has a mental image of”, says Mr Keane, but “the entire country”.

“The key thing about drug problems is they are not respectful of backgrounds. The reasons people use drugs are complex, but things like poverty, social deprivation, perceived disparities in wealth and education – they are the types of things that do impact on rates of drug use.

“But I am sure there are many Irish Times readers who have drug use in their families and what this policy change would ensure is no matter what the background or situation the response to that should be health-based. It shouldn’t be a criminal justice response.”

“The very process of being criminalised is stigmatising, and the stress that puts on the family and the individual, the interruption in their life, and to what end?”

He stresses, if drug users commit crimes such as theft or assault, they will still be prosecuted.

“It’s important to be clear if someone steals a handbag they should be prosecuted. That is a crime. All we are saying is that when somebody is caught in possession of drugs they should not be criminalised.”

Decriminalisation would especially benefit women addicts, many of whom fear seeking treatment due to the stigma and criminalisation, and particularly mothers who often fear losing their children should they come forward for help, he adds.