Behind bars in Dublin, prisoners knit for the vulnerable 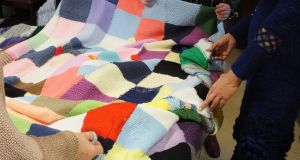 Angelique first started knitting in Limerick Prison. She learned how to make baby blankets and found that the methodical rhythm of knitting needles helped clear and calm her mind. When she was transferred to the Dóchas Centre, the women’s prison on the Mountjoy campus in Dublin, she was determined to keep improving her skills, and she approached one of the volunteers in the centre.

“I asked if there was any chance she could get us some wool. I decided I wanted to knit scarves, hats and gloves for homeless people, just to help them keep them warm. It’s really sad when you look at the news and see the homelessness,” she says. “Even people who come in here, lots of them come of the streets and have nothing. It’s so cold out there now. I know a scarf and a hat might not make much of a difference, but it will keep them a bit warmer.”

Angelique is just one of the group of about 12 women who take knitting and crochet classes at Dóchas and were recently involved in knitting six blankets that were donated to the Irish Red Cross. The group decided to make them following a call-out from Valery Larkin, in Co Clare, who is attempting to break a Guinness world record by knitting the world’s largest blanket. Once the blanket has been completed it will be divided into 600 smaller, 150cm-by-150cm blankets and distributed to vulnerable people across the State.

Irene Farrelly, who volunteers as a befriender in the prison and leads the knitting classes, says many of the women fully understand the importance of having a woollen blanket to keep warm. “Some of the knitters were homeless – and some still are – so they understood how welcome a warm blanket would be on long, cold winter nights. It was scary to hear them explain what it is truly like to be homeless, and to see the empathy from the other women who have a home.”

Sandra’s arthritis in her hands means she can no longer knit, but she still gets great pleasure from crocheting clothes and decorations. She now crochets tiny outfits for premature babies at the Rotunda Hospital. “When the parents of a premature baby are handed a blanket that’s so huge the baby is lost in it, that’s the memory the parents will have of their child. If they’re dressed up in these clothes they can get pictures which is so much nicer.”

Sandra says many of the women at Dóchas have discovered their “gift” through courses in the prison. “There’s so many classes here, and we never knew we could do this before we came in here. When you’re back in your room at night, rather than sitting there and dwelling on what could have been, you can just pick up your knitting. It takes you away from absolutely everything else.”

Speaking at the presentation of the blankets to the Irish Red Cross on Thursday, the Irish Prison Service’s director general, Michael Donnellan, commended the women for their work, which he said showed the benefits of providing training opportunities for prisoners.

Echoing the words of Nelson Mandela, Mr Donellan said a person should never judge a country before they have seen the inside of its jails, and underlined the importance of protecting prisoners’ dignity.

“We now have what we call the Mandela rules . . . standards that every country should aspire to. I think if he was here today, and looked inside this prison, he’d see the kinds of things he was trying to explain to people.”