No State funding for the trust that Alice built 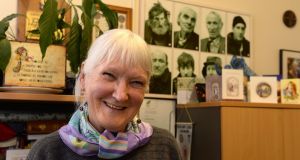 It is the trust that Alice built. In 1975, Tipperary woman Alice Leahy, then a young nurse, believed she would solve Dublin’s rough-sleeper problem within a year. Today she is still running the Alice Leahy Trust.

The trust’s six staff and four nurse volunteers work in a brightly-lit basement under Iveagh Hostel in Dublin’s Liberties, providing showers and clothing for men and women living on the streets: “It is quite shocking that we don’t have public showers in Dublin,” says Leahy.

In her hand is a letter from one of the trust’s success stories, a man helped years ago. Every Christmas he writes, sending €10 and a detailed account of how his life is going. He has health problems, but is in good form.

“We never ask for money. We send out no letters looking for money, and we make sure nobody is using our name with their collection boxes. We’re in the very fortunate position that people are very good to us,” said Leahy.

In a comfortable room three young men sit drinking coffee and picking at mince pies and biscuits from a well-laden table. Looking to be in good health, they are shy. One man heads for a shower, while another prepares to shave.

In a room further back, carefully-folded jackets, shirts and socks are neatly arranged on shelves by two staff who unpack recently-arrived parcels. Besides the clothing there is donated salmon, bread, tea, sugar and fruit. “We haven’t had to buy tea bags in years,” says Leahy.

At the end of the day you have to wonder how much do [the homeless] get at all. The State has offloaded every service

The Alice Leahy Trust receives no State funding. “We did get statutory funding for years. The health board was very different then. They paid my salary in the early days, and they gave us a grant. About 12 years ago we felt we didn’t need a grant. Our independence is crucial,” she said, adding that they protect their clients’ stories.

A former trustee once told her: “Alice, people’s personal information might be their only possession.”

People can be reluctant to speak of the past. One well-educated, now deceased homeless man once complained that he would “need a solicitor with me” if he went to apply for accommodation from the authorities because he was asked so many questions.

Every donation is receipted, says Leahy, who questions the role now played by larger homeless agencies. “They now are providing the housing, and that should never have been allowed, or they should never have allowed themselves to do that. Now they are almost like developers.”

Leahy has found this Christmas particularly difficult. “It could be because I am around so long. But every time you turn on the radio it’s someone who’s paid to do an ad to bring in money. We get a lot of calls from people questioning that.

“Look, we wouldn’t comment on another agency. People are asking questions. Why isn’t the problem solved if all that money is . . . we’re now talking about millions. People have to have big fundraising activities. They have to advertise, and that costs money. And at the end of the day you have to wonder how much do [the homeless] get at all. The State has offloaded every service. Serious questions have to be asked.”

People come and go as she talks. Some to use the trust’s service. Others to make donations, including a garda. He came with a cheque for money raised from running the Dublin City Marathon. “I know the good work being done here, massive work,” he says.

Rev Olive Donohoe, rector at the Athy Church of Ireland union of parishes in Co Kildare, arrives with bags of clothes, helped by another woman who makes the introductions. “This is Olive. You can never have enough Olives,” she says about her friend.

The office has more Christmas cards than is usual this year, including one from Desmond and Penny Guinness wishing Alice, “Sonas séan agus beannachtaí no Nollag agus gach rathsan ath bhliain” (in old Irish script) and in English. The trust is “extremely grateful” to the Iveagh Trust run by the Guinness family. Leahy says the rent is nominal, and the Guinnesses are generous donors.

Former dean of St Patrick’s Cathedral Robert MacCarthy comes with a donation from candle sales in the cathedral. “It’s our nearest homeless charity. Of course Alice and I come from the same part of the country, which is a help,” he says. The cathedral also stores spare clothing for the trust.

Leahy is “troubled” by the numbers becoming homeless because of family breakdowns. “If every relationship breakdown results in someone wanting a new house we’re never going to get to the end of it. We need to be able to help people when problems arise in the home.”

In rural Ireland communities were able to absorb people who didn’t fit in. Now I’m not sure that’s happening

Many of the trust’s users are foreign nationals: “They remind you of pictures of the Irish in boarding houses in London a generation ago. They would be people who came with a dream of a better future.”

Some of the oldest clients “could be up to their mid-80s. They’ve been drifting in an out of hostels all their lives. They know no other way.”

Leahy says Ireland has two kinds of homeless: the ones who can be given housing and those “who don’t fit in easily into society”.

Jimmy McMahon arrives from Lucan with shoes, shirts and trousers. “Myself and my wife Bridget, we collect them from neighbours. We also put a notice in the newsletter for men’s clothes every few months.”

Martin Peelo from the Garda Tour de Force Cycling Club also calls. Every year the club picks a charity to help. Over 20 years it has raised €1 million from sponsored cycles.

“We always give a few bob here [the trust]. Look at this, look at these people here,” he says approvingly, “We go off, we cycle. We do something that we enjoy and at the same time you’re helping someone else. What better way to live? Isn’t that it?”

Leahy, while not questioning their decency, wonders about those who take part in sleep-outs and other homeless fundraising,

People will die on the streets. They’re going to die, but they’ll die because of their lifestyle, and very often nobody can do anything

“They all tell you the government is to blame, the Minister is to blame, someone else is to blame. When I hear that coming from very young people I kind of cringe and say ‘hold on a minute’ because we have lost the capacity, I think, to say ‘come on, we’ll do something ourselves’.”

Citing the death of Jonathan Corrie (43) who died from an overdose on the steps of a building near Leinster House in 2014, the blunt-speaking Leahy says that some campaigners are using the poor for their own political ends.

“He was used by people. People will die on the streets. They’re going to die, but they’ll die because of their lifestyle, and very often nobody can do anything. How do you protect people from themselves? You can’t.”

Just one man using the Alice Leahy Trust’s services agrees to speak openly. Mohsin Rosul (31) had come for a wash and a shave. He has been in Ireland “seven/eight years” after “six/seven years” in England, where he arrived with his family from Pakistan in 2000, when he was “13/14”.

His mother died, and there was “a problem in the family”, so he came to Ireland. He worked for more than five years. Now there is too much competition for him. “Students from different countries. They are now hiring students to pay cheap wages.”

There are “many people with papers who are not working, and people who are not supposed to work, they are working. They take €5 per hour, cash. We take €10 per hour [minimum wage],” says Rosul, who is a mechanic.

The Dublin garage he worked in was sold last February. He lost his job, and “got sick”.

“The money finishes. The rent was very expensive.” He began to ring the freephone helpline to get a bed for the night from Dublin City Council. When he gets a few days’ work he stays in “a hostel, a tourist hostel”.

A friend brought him to the Alice Leahy Trust that first time. It has been “very helpful, the best people”, he says simply and gratefully.