Rally on homelessness to take place on December 1st 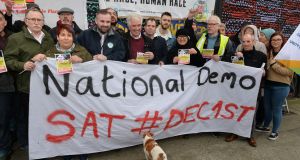 The scene at the launch of the National Homeless and Housing Coalition demonstration which will take place from the Garden of Remembrance on December 1st. Photograph: Cyril Byrne

Mass rallies calling for “radical action” to end the housing crisis would “continue and continue” until Government listened, campaigners have warned.

The National Homeless and Housing Coalition, an umbrella group of activist organisations, on Friday called on “as many people as possible” to join a march at the start of next month demanding action on housing and homelessness.

The protest, starting at 2pm at the Garden of Remembrance on December 1st, follows the “Raise the Roof” rally outside Leinster House last month attended by about 15,000 people.

Organisers gathered at City Quay to highlight the upcoming protest on Friday.

Rather than implement the demands in a cross-party motion passed in the Dáil on the day of the rally, he had, she said, “implemented a landlord’s budget” in the Budget the following week.

“So we feel we have no choice. We are going to be back out on the streets to tell Eoghan Murphy and his Government that we the people are not going away until we get the radical action we need. This is a growing movement. We are going to be here a long time and we will keep coming out until we get the action we need. This crisis is unsustainable and untenable,” said Cllr MacVeigh.

The campaign is calling for a large-scale construction programme of quality, affordable public housing, measures to prevent people being evicted into homelessness and the enshrining of the right to housing in the Constitution.

Among those who at the gathering on Friday was Debbie Finnegan (39) from Blanchardstown who has been homeless for eight years.

“My partner died nine years ago. I lost him first and then I have been sofa-surfing and homeless since. I was an addict and I am not fully clean but I do my best to get up in the morning, get dressed and just keep going.

“You need to start helping us. People are living in predicaments with men abusing them in their sleep, because they have nowhere to go . . . I’m just sick of it. It’s just so hard.”

Michelle Byrne, vice president of campaigns with the Union of Students in Ireland, said there were students sleeping in cars and college libraries who were unable to access housing.

“Just this week I was speaking to a woman doing a Masters in Cork and she is travelling every day from her home in Dublin to her classes in UCC. She couldn’t rent in Cork because she couldn’t afford the up-front first term’s rent, plus a month’s deposit, plus the fees for her Masters. It was coming to €14,000. So she’s travelling five hours a day, she’s tired. It’s affecting academic performance and mental health.”

Bernard Joyce, director of the Irish Traveller Movement, called on “as many of our members as can make it” to attend the march on 1st December.