Ballydoyle WRC ruling: ‘Everybody is worried about it’ 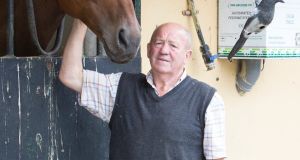 Champion horse trainer Michael Hourigan says he and others are “worried” that their businesses will be forced to shut, should Ballydoyle Racing Stables lose its challenge against findings by the Workplace Relations Commission that it breached employment law.

While Ballydoyle may have the financial muscle to survive the course, Hourigan fears the implications for smaller trainers, like him, could be disastrous.

“Everybody [in the industry] is worried about it,” Hourigan tells The Irish Times at his 100-acre Lisaleen Stables yard, in Co Limerick, once the home of past champions Doran’s Pride and Beef or Salmon.

“Without a doubt, it will close a lot of people. I would not like to be starting in my game again. There is no way I could see us putting a place like this together now,” he says.

Hourigan has trained “over a thousand winners”. His message to the next generation of hopeful stable grooms and trainee jockeys, who may believe they are in for an easy ride, is to find to an alternative career. “If you don’t like [hard work], leave,” he says.

Ballydoyle, the stable run by Aidan O’Brien, is challenging findings by WRC inspectors that its stable staff had worked up to 19 hours over a 24-hour period without required compensatory rest periods.

Ballydoyle has argued that its employees are exempt from provisions under the Organisation of Working Time Act as they are engaged in agricultural work.

Hourigan says: “We are under the agriculture [banner]; we’re run by agriculture, and why shouldn’t we be.”

Clearly frustrated with the “huge changes” that could be coming down the tracks, Hourigan says: “I don’t know where it will all finish up. They’ll close the industry down, that’s what they will do.”

“They’ll price [people] out of it. They’re trying to bring [the sector] in line with every other work.”

“This industry is unique in its own way because it’s a passion,” he says.

Hourigan, who turns 70 in December, is unapologetic for his views on working hard in this industry.

“You can’t learn it from a book; A stablehand is a stablehand. His qualifications – he needs none; nothing only experience. He needs to [be able to] push a brush, push a wheelbarrow or ride a horse.”

His daughter, Kay, who shares his passion, approaches us in the yard: “You can’t just close the door at the weekend and say [to the horses], ‘bye, see you Monday’.”

“If you don’t like it, move on, and a lot of people are moving on,” she adds.

They both acknowledge the work is “seven days a week”, but argue that employees are aware of the commitment involved before signing up.

Despite training over a thousand winners, Hourigan admits his business has suffered badly. The recession has wiped out any “luxuries”.

Much of what he earned was put back into the business, he says, which includes two indoor schools, three gallops, and a swimming pool for the horses.

He did not foresee having to return to mucking out stables at 7am every morning, but he says he’s glad to do it so he can survive.

He warns: “They say the recession is over – it’s only over on the [Dublin] borderline, out as far as the Red Cow.

“The recession cost me enough. I was owed a lot of money and I didn’t get it [back] and that was it. People ran into bad times, they ran into a hole. What could you do, you can’t get blood from a turnip.”

Wages at Lisaleen are approximately €400 per week after tax and accommodation is free. Work begins at 7am, with a three-hour break from midday, before work resumes again at 3pm until the dinner bell is rung at 5pm.

“[The staff] get a month’s holidays every year, with wages. Everything is there in the books,” Hourigan says.

Reliable ITBA sources said: “We are aware the WRC are concentrating on this and we wanted to make sure our [members] were aware of their requirements.”

Bernard Caldwell, chairman of the Irish Stable Staff Association (ISSA), would not comment on Ballydoyle’s challenge to the WRC findings.

However, speaking generally, he said “if there’s queries [about work contracts] that we don’t hear about, we can do nothing about it.

“Anything we do get, we deal with it.”

He advised stable staff to get legal advice and advice from the ISSA before signing work contracts.

He added: “We’ve taken several cases against trainers and we won them all.”

Caldwell said: “On a yearly basis we probably deal with between 70 and 100 [workers complaints]. They could be about holidays, wages, travel expenses, bullying, rows in the yard . . . There’s a variety of things that can happen which we deal with.”

He said the ISSA had “a good working relationship” with trainers, and that he did not believe there were widespread problems surrounding workers contracts.He added: “There’s no union in this country that got the wage increase we got [for members] this year. We got a 10.75 per cent wage increase, and our wage at the time was above the agricultural minimum wage. We got a 25 per cent increase in travel allowance for going to races. We’ve had a huge lot of improvements.”