Amnesty insists Soros funding not for use in referendum campaign 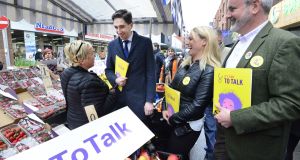 Amnesty International Ireland executive director Colm O’Gorman has insisted a controversial €137,000 donation to the organisation was not for use in its campaign for repeal of the Eighth Amendment in next month’s abortion referendum.

The donation from Open Society Foundations, the philanthropic group funded by billionaire George Soros, is at the centre of a standoff between Amnesty and the Government’s ethics watchdog.

The Standards in Public Office Commission (Sipo) has told Amnesty to return the money, arguing it has contravened the 1997 Electoral Act, which prohibits foreign donations from third-party organisations for “political purposes”.

Speaking to The Irish Times at the launch of Amnesty’s “It’s Time To Talk” repeal campaign, Mr O’Gorman said the funding was related to work carried out by Amnesty in 2016 and 2017 that was targeted at the Government rather than the electorate.

“It’s got nothing at all to do with our campaign that we’ve launched here today,” he said. “It relates to a campaign that was targeted at Government to secure a commitment to changing Irish law on abortion.

“It was seeking to change Government’s thinking on the whole issue of reproductive rights. The campaign we’re running now is targeted at the electorate. It’s a completely different thing.

“A campaign that targets the electorate is a campaign that involves elections and campaigns and we absolutely recognise that rules and regulations can be put in place by the State and we’ve no difficulty in complying with them.”

Amnesty, which has refused to return the money, has received permission to challenge the order by Mr Justice Seamus Noonan. The case is expected to be heard later this month.

Separately, Amnesty has registered with Sipo as a third party, which means it can use donations for campaign purposes. Organisations that aren’t political parties but who receive donations of more than €100 for political purposes must register with the watchdog.

The “It’s Time To Talk” campaign was launched with Minister for Health Simon Harris and independent senator Lynn Ruane, who was a member of the Joint Oireachtas Committee on the Eighth Amendment.

Mr Harris, Ms Ruane, and other campaigners held conversations with traders and passersby on Dublin’s Moore Street on the reasons why they are campaigning for the referendum to be carried.

“From this point forward, it will be the conversations people have with friends and family that will decide this crucial referendum,” said Mr Harris.

Ms Ruane said the referendum was “about working-class women”, and appealed for conversations around the issues to be held in communities.