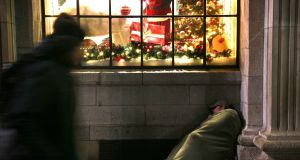 A rough sleeper outside the GPO in Dublin City Centre. Photograph: Nick Bradshaw

The number of people sleeping rough in Dublin has increased by a third (33 per cent) since April, the latest official figures show, reaching a record high of 184.

In addition there were 50 adults in the Merchants Quay night cafe, bringing the total number of adults unable to access an emergency bed on the night of the 7th/8th November to 234.

The figures have been published by the Dublin Region Homeless Executive (DRHE).

Over two thirds (70 per cent) of those found sleeping rough were in the city centre, with the remaining 30 per cent were in the outskirts and in Fingal, South Dublin and Dun Laoghaire.

In addition to the 234 adults unable to get an emergency bed on the night there were 3,385 adults and 2,335 children in emergency accommodation beds, giving a total homeless population in the capital of 5,954.

The figures come as the DRHE announces details of its 2017 cold weather initiative. An extra 200 “permanent emergency beds” are to open and 50 extra temporary emergency beds for the winter.

“The 250 ‘bed spaces’ are distributed across seven new emergency accommodation facilities which will be operated by our partner agencies in the charity sector,” a DRHE spokeswoman said.

“Each of the service providers has extensive experience in the delivery of services to persons who are homeless and have staff with the required skills and competencies. Each is established under a Service Level Agreement with the DRHE.”

Charities working in the sector described the 30 per cent increase in seven months as “extremely worrying”.

Kerry Anthony, chief executive of the de Paul Trust said: “This time last year, Depaul had 102 emergency beds in its services across Dublin. Today, the organisation has 198 beds as well as two emergency family rooms, every one of these beds is filled each night, demand is constant and increasing.”

Pat Doyle CEO of Peter McVerry Trust said: “The figure of 184 is very disappointing and it’s clearly not acceptable. There has been a huge increase in the number of beds spaces in emergency accommodation and the Housing First project has housed 76 people in the last year.

“It is imperative that each local authority begins to provide social housing through direct build for single people and couples and that it is adequately represented in all new build housing schemes be they private or public housing.”

Focus Ireland said the figures showed the housing and homelessness crisis was “continuing to deepen with less than five weeks to Christmas”.