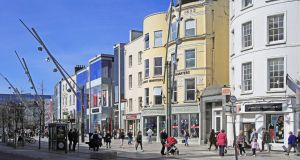 A one-bedroom city centre flat in Cork rents for €750 a month, and is hard to find. Photograph: Getty Images

An “insatiable appetite” for higher rents by vulture-like landlords is leaving tenants open to exploitation in a “completely broken market”, according to a Cork auctioneer.

Saying that he feels sympathy for people facing high rents, Andrew Moore, a 25-year veteran in the trade, said the cheapest three bedroom semi-detached now rents in the city for €1,200 a month, approximately.

“People are spending so much of their income on putting a bad roof over their head. They have no fixity of tenure,” said Mr Moore, blaming a lack of State action and regulation.

“Despite all the hot wind that emanates from our politicians no party has taken the property moguls on. There are very good landlords who don’t make increases because they don’t want to upset good tenants.

“But you have the other breed of landlord. The hungry ghosts who have a complete lack of moral ethos,” said Mr Moore, adding that tenants should be able to rent for up to 30 years.

“Whatever is wrong with our psyche very few of our citizens seem to be able to own property and to be civil,” said the auctioneer, who said a small number of landlords are acting in a “criminal way”.

Many long-standing landlords in Cork city who “understand property” are “being castigated unfairly”, he said, while legislation fails to protect good landlords and good tenants.

“I have seen situations where clients have disruptive tenants who haven’t paid in a year and there is nothing they can do about it. However, my sympathy is primarily with tenants.

“The system favours bad landlords, not good landlords. I don’t want to be bashing the landlord. The main problem is legislation or the lack thereof,” he said.

Meanwhile, one Cork auctioneers, Era Downey McCarthy now allows only 10 people to view rental properties at a time to prevent having “queues down the street”.

Saying they had made the change to be fair to tenants, Saoirse Moore said: “There is very little availability with rentals. A property goes up [for rental] and people have the Daft app and its gone very quickly.”