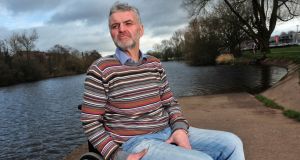 David Dineen: In 2002, his childhood abuse was recognised at the Residential Institutions Redress Board. Photograph: Daragh Mc Sweeney/Provision

As a child, David Dineen (46) experienced “savage sexual abuse,” and beatings in a Brothers of Charity institution in Cork. He left, aged 15, and spent spells homeless and involved in drugs and crime. He found it difficult to form lasting relationships.

He has spent his adult life recovering from and coming to terms with his childhood.

“And then along came Caranua,” he says. “They caused me so much distress, in the end, last September, I had to pull away from them for my mental health.”

Caranua is the independent body established under the the 2012 Residential Institutions Statutory Fund Act to manage €110 million pledged by religious congregations to enhance survivors’ lives.

In 2002, David’s childhood abuse was recognised at the Residential Institutions Redress Board, and he was made an award of €50,000.

In December 2014, when he lost power in his body, doctors suspected multiple sclerosis. He needed an “urgent brain scan”. Though deteriorating he was told he could be up to 18 months on the public waiting list.

“I applied to Caranua to pay for a scan, but they refused.

“I’d had physiotherapy, counselling and dental work so they said I had reached my limit. I had to borrow €2,000 to pay for it.”

He was diagnosed with syringomyelia, a condition where a cyst had developed inside his spine, causing extreme pain and loss of power in his legs. As the cyst elongated it began to destroy David’s spinal cord and nervous system, causing incontinence and extreme fatigue.

“I went downhill during 2015. I was hunched over on crutches. . . I needed a wheelchair. The HSE had given me a standard chair but with muscle weakness I couldn’t push it. I was a prisoner at home.

“I got measured for an electric chair, and got a quote of €2,200. I sent it to Caranua and they refused it. Eventually I raised €400 with a GoFundMe campaign and bought this chair. It’s totally unsuitable but it’s better than the crutches.”

In 2015, as he spent several months in hospital, he fell behind with his rent. His landlord evicted him.

“I was telling Caranua all along. I was imploring them to use their ‘exceptional needs’ powers to help. But I was refused.”

According to its rules, Caranua does not fund “ongoing expenses” such as rent or mortgage payments, but it can advocate on applicants’ behalf with local authorities or housing bodies.

Out of hospital, he spent several weeks in a friend’s caravan without water or electricity, and then six months in B&Bs, funded by Cork County Council. He now has a council house in west Cork. His 19-year old daughter cares for him.

He was “always respectful in interactions with Caranua”, he says. “But they caused me so much distress.”

Many of his calls were not returned, he says, and he was hung up on when he got upset. He was treated with a “complete lack of empathy or compassion”.

“I was told I’d had enough already and other people needed help too. But the guidelines said people could apply as often as they needed. [I felt] I was back in the institution again. I wasn’t a human with needs.

“The scheme is meant to enable people live a fuller life, but the way it’s run, it’s disabling people. It’s abuse, again. We should be treated as citizens, with the dignity and respect we lost in our childhood.”

David, who remains on a public waiting lists for more scans and for an electric wheelchair, says his life is a “holiday” compared to his childhood. He is speaking out, “not so much for myself but for other victims of Caranua who do not have a voice”.