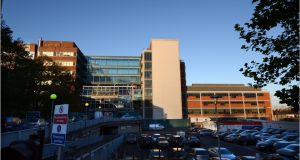 The Mater hospital in Dublin is fully owned by the Sisters of Mercy. Though few, if any, nuns are active in clinical work, members of the order sit on the board. Photograph: Dara Mac Dónaill

The controversies over the Tuam babies and the cost of the redress scheme for survivors of institutional abuse have led to renewed calls for an end to religious involvement in healthcare.

Fianna Fáil leader Micheál Martin said any property interests retained by the Catholic Church in hospitals should be handed over to the State. The State has already invested heavily in hospitals such as the Mater and St Vincent’s in Dublin and is essentially running them, he argued.

Minister for Health Simon Harris said there was “significant merit” in seizing hospital and school property in light of the shortfall in the church’s contribution to the redress scheme for those abused in Catholic institutions.

Their interventions could be considered opportunistic and it seems unlikely that church-run hospitals would – or even could – be seized to help pay for the €1.5 billion redress scheme. However, they do suggest an analysis is needed of just how much involvement the church has in the public healthcare system of today.

In any case, church organisations themselves may wish to reassess their involvement in health in the light of falling vocations and changing public mores, just as they are in the field of education. Some already are.

Historically, the Irish health service owes a lot to the church, which was responsible for setting up many of the country’s hospitals in the 19th and 20th century. Today, the system is almost completely State-funded and the level of Catholic involvement varies considerably from institution to institution.

The Mater and St Vincent’s stand out among major acute hospitals as being fully owned by religious orders – the Sisters of Mercy and the Sisters of Charity, respectively. Though few, if any, nuns are active in clinical work in either hospital, members of the orders sit on the boards of both hospitals.

The Sisters of Mercy sold off the Mater Private more than a decade ago but the St Vincent’s campus is home to a public hospital and a private hospital located side by side. The hospital group says the affairs of both hospitals are run separately but this is not a view shared by the HSE, which has sent in forensic auditors to examine the public-private split worked by consultants.

All of these hospitals are funded by the taxpayer and there is little to distinguish their services or their operations from that of mainstream HSE hospitals. What defines them more, arguably, is their status as voluntary hospitals, run independently from the HSE.

A possible exception relates to ethos; Catholic-owned hospitals are generally less likely to offer services, particularly in reproductive health, that conflict with the church’s ethics. The ethos issue featured prominently in the recent row over moving the National Maternity Hospital to the St Vincent’s campus, though most clinicians in both hospitals denied it was a factor in their disagreements, which have since been resolved.

There is a strong Catholic involvement in the running of other hospitals, though their ownership structures are more complex than at the Mater or St Vincent’s.

Our Lady’s Children’s Hospital in Crumlin was set up by the Archbishop of Dublin in the 1950s and the incumbent, Dr Diarmuid Martin, chairs board meeting. The hospital is owned by the board.

Four clerics of various hues sit ex officio on the board of the National Maternity Hospital, which was established under an Act of the Oireachtas in the 1930s. Dr Martin is, by law, the chair of the hospital but is not active in the post.

The level of Catholic influence is, arguably, far higher in private medicine than in the public system. The Bon Secours order, which ran the mother-and-baby home in Tuam, owns one of the biggest private healthcare businesses in Ireland, which pays €3 million in annual rent to the order.

Yet despite the perception in some quarters that the church is refusing to cede control in healthcare, many orders have closed down hospitals or passed ownership to the state in recent decades. Our Lady of Lourdes in Drogheda and Portiuncula in Ballinasloe, for example, were formerly owned by religious orders but are now part of the HSE.