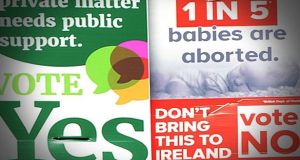 A statement from all three campaign groups for a No vote called the move “scandalous . . . and an attempt to rig the referendum”.

Campaigners to retain the Eighth Amendment to the Constitution have said the Google decision to ban referendum advertising was taken because of fears the No side will win.

It was also claimed the decision taken on Wednesday makes it more likely that the outcome of the referendum will be challenged.

The Pro Life Campaign, Save the Eighth group and the Iona Institute held a joint press conference in the wake of Google’s announcement.

They said it amounted to Google “shutting down a free and fair debate” and is unprecedented.

The decision applies to all Google’s advertising platforms, including AdWords and YouTube and will come into effect from Thursday, May 10th

“Following our update around election integrity efforts globally, we have decided to pause all ads related to the Irish referendum on the Eighth Amendment,” said a spokesman for the company.

A statement from all three campaign groups for a No vote called the move “scandalous, and . . . an attempt to rig the referendum”. Google was also challenged to substantiate its statement about the integrity of the vote.

“This decision is not about ‘concerns about the integrity of elections’,” noted the statement. “It is about concerns the No side will win. It is very clear that the Government, much of the establishment media, and corporate Ireland have determined that anything that needs to secure a Yes vote, must be done. Online was the only platform available to the No campaign to speak to voters directly. That platform is now being undermined, in order to prevent the public from hearing the message of one side. This is is completely unacceptable, and it brings the conduct of what had, heretofore, been a civil campaign into severe disrepute.”

John McGuirk of Save the Eighth said those advocating that the Eighth Amendment be retained will now lose out significant advertising space which had been pre-booked for the final two weeks of the campaign.

He compared Google’s decision to An Post potentially saying it would not post leaflets from campaigners. He said the media “would be up in arms” if that happened.

Mr McGuirk said that if the proposal to repeal the amendment is defeated, there would be “six months of hysteria” similar to the reaction to Donald Trump’s election as US president.

He said Facebook and Google “were set up to be the fall guys” for such an outcome. Both Mr McGuirk and David Quinn of the Iona Institute said they supported Facebook’s decision to ban foreign-funded adverts and said Google should follow suit.

Instead, Mr Quinn said Google’s decision is “completely disproportionate”. He said Google should either follow Facebook’s lead or prove there is a basis to its concerns about the integrity of the referendum.

Mr McGuirk said Together for Yes, the umbrella group campaigning for repeal, see Google’s decision as a “massive victory”.

He claimed it was due to pressure from repeal campaigners, Government ministers and journalists.