It's day two of the 2019 BT Young Scientist and Technology Exhibition at the RDS in Dublin. A number of projects are examining aspects of sport. Video: Bryan O'Brien 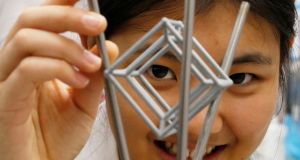 How can I stop my sliced apple going brown in my lunchbox? Is it possible to charge a phone using exercise? Does listening to classical music make you smarter?

These are just a few of the questions asked by young students participating in the Primary Science Fair in the RDS, and in some cases the answers were not what was expected.

Take the so-called “Mozart effect” – the suggestion that exposure to the Austrian composer boosts brainpower. Fifth-class students from Rush and Lusk Educate Together national school, under the guidance of their teacher, Anne Wearen, put their fourth-class colleagues through a series of maths tests.

“As it’s still a theory, we decided to put it to the test,” said Emma Gleeson.

One group did the tests in silence, another while listening to the music of Bach and a third with ears infused with a masterpiece by Mozart. To their amazement, students in the first two settings yielded the highest average results.

The firm conclusion was “Mozart has no effect on learning ability”, Emma declared in a polished presentation. The final flourish was a big reveal. She lifted a paper flap on the display behind her, which proclaimed: “It’s false.”

Sixth-class students at Brannoxtown National School in Co Kildare got a positive result in their experiment, which was also a surprise. They tested the effectiveness of using fruit juices for cleaning hands and compared them with anti-bacterial soaps. The experiment followed an experiment on mould in their science class with teacher Sarah Fitzpatrick.

Of six juices – evaluated by placing a palm on a large petri dish with agar – tomato and pineapple came out tops. Not only that but tomato clearly outperformed a commonly available cleanser product promising to kill off 99.9 per cent of bacteria, said Andrew Dempsey.

As for the future, George said they were thinking of a tomato hand wash. “If we could sell it, that would great,” he said, with eyes lighting up at the prospect of commercialisation.

Pupils at Avoca National School in Co Wicklow decided to do a similar testing of products in the consumer’s interest, by evaluating eight varieties of antacids used to reduce acid reflux. Ava Doyle (12) outlined how they recreated similar conditions found in the human stomach using a base of red cabbage water and lemon juice.

The longest product on the market, Milk of Magnesia, proved to be the most effective, she reported. Some boys in the class of teacher Kathy Van Eesbeck did a parallel series of tests on foodstuffs that create the most acid when they break down – vinegar was the worst culprit, according to Rowan O’Neill (12).

Fourth-class pupils at St Michael’s Junior School in Dublin conducted a simple but effective test on what combinations of vegetable oil, Vaseline and hair wax are best at making material waterproof. Luke Daly (10) said their results were so good that he predicted it could lead to a product of the future.

Their teacher, Sarah Langan, said they do science once a week. “It’s very easy to keep them motivated when it’s science-related,” she added.

The fair takes place alongside the BT Young Scientist & Technology Exhibition every year. Speaking at the opening on Thursday, Minister for Children and Youth Affairs Katherine Zappone said: “It is a real honour to see the great work being done. Young minds are the best minds for cultivating innovation and these kids are the future leaders of tomorrow.”