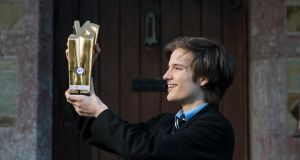 A new software programme that could make the internet a safer place has culminated in its developer Greg Tarr winning the 2021 BT Young Scientist & Technology Exhibition (BTYSTE).

The 17-year-old Leaving Certificate student at Bandon Grammar School in Co Cork used artificial intelligence to develop his system that detects “deepfake” videos, which have caused havoc on social media channels. It is quicker and more accurate than many of the state-of-the-art detection systems, the judges found.

The announcement was made at the first virtual BTYSTE awards ceremony, streamed live from the Mansion House on Friday. The 57th staging of the contest had to go online because of Covid-19.

It is the fifth time that the Cork student entered the BTYSTE, and continues a remarkable trend where so many overall winners come from that county – and his win adds to a series of outstanding winners in technology and IT who have undertaken ground-breaking research of global significance.

These include Patrick Collison of Stripe (winner in 2005); Shane Curran, founder of Evervault data privacy company (2017); and Sarah Flannery (1999), who discovered a new way to encrypt data.

As technological tools have advanced, so too has the spread of misinformation. The societal impact is widespread, from bullying in a small social network to influencing democratic elections. A particularly sinister form of misinformation is when a synthetic image or video is created by replacing a face with the likeness of another, known as deepfake.

This often takes the form of superimposing the face of a celebrity in an explicit image or video. The technology is now so advanced that it can be difficult for the human eye to tell whether the video is fake.

Greg used a sophisticated AI programme with more than 150,000 lines of code, securing significant improvements on speed and efficiency when compared to the current best model, without sacrificing its ability to accurately detect the fake.

In a three-minute video submitted to judges, the overall winner outlined how he attempted to solve the deepfake problem by using AI to run images in batches by using “ensemble” methods involving multiple learning algorithms to obtain better predictive performance.

This improved the classification of deepfakes, and he then went on to devise “a novel, high-speed face detector...with pretty good results”. These, he found were just as accurate as current state-of-the-art systems but quicker. In addition, he said his system could be used at a tenth of the cost.

On Channel 4’s light-hearted deepfake of Queen Elizabeth’s Christmas speech, he noted: “My system correctly identified the Channel 4 deepfake of the queen with a 94.3 per cent confidence.”

This tool could potentially be deployed at scale to filter out deepfake content, making the internet a safer place, the judges concluded.

Chair of the technology category judging panel, Leonard Hobbs from Trinity College Dublin, said Greg demonstrated an expertise in computer science which was well beyond his years. “The level of coding he deployed in developing the extremely complex programme, which detects fake videos, was guided by his deep understanding of the state of the art of this leading-edge technology”.

“The judges have been continually impressed by Gregory’s projects at the BTYSTE over the past few years and they were delighted that he had progressed to winning the top award this year,” he pointed out.

Speaking after his win, Greg said he was delighted to have won. He confirmed his programme is 10 times faster than standard detection systems he had evaluated. Machine learning had an emphasis on accuracy, but he believed it had to be fast also so it could be deployed at scale.

Group winners and runners up

The group runners-up award went to Isobel Hynes and Ava Hynes, also from Coláiste Treasa, for research on young people’s attitudes towards Covid-19 “and subsequent impact on response to restrictions and vaccine uptake”.

Minister for Education Norma Foley congratulated all students who took part in the event and particularly Greg Tarr. “I am inspired by all of the students’ ambitions to tackle from a scientific and technological view national and international issues facing us in today’s society, including the global pandemic, climate change, mental health and socio-economic challenges,” she added.

BT Ireland managing director Shay Walsh paid tribute to students who had gone beyond limits this year to present their projects to judges online, adding they were a credit to their schools, communities, and families.

He added: “Together, by participating and supporting, you have provided a ray of hope and optimism in these dark days. You’ve spotlighted the talent that exists in communities across the island of Ireland and at a time when we must stay at home, you have helped showcase that talent to people across the world.”

As of Friday morning visitors from 77 countries had viewed the online exhibition.

The Science for Development award presented by Irish Aid and Self Help Africa went to Aronnya Khan Zakaria of Castletroy College, Limerick, who examined factors in society and in family life that influence racial prejudice and discrimination in children, and how to prevent it.

Details of projects and other BTYSTE events streamed this week are available at https://portal.btyoungscientist.com/