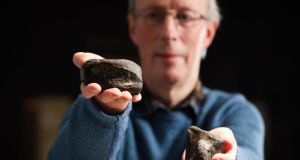 A new study of fossilised bones reveals that dinosaurs roamed our shores about 200 million years ago. The bones, which were found along Co Antrim’s eastern coast in the 1980s, are the only dinosaur remains to have ever been recorded on the island of Ireland.

Since their discovery, palaeontologists had long suspected that they were of dinosaur origin but now dinosaur experts have finally identified them as such.

“People knew about them but they had never been formally described. Now it’s official. We know what these dinosaurs are,” says Dr Mike Simms, a curator and palaeontologist at National Museums Northern Ireland and lead author on the study.

A team of experts from the University of Portsmouth, Queen’s University Belfast and National Museums Northern Ireland described four specimens that were previously thought to be dinosaur bones.

By looking at details of the internal structure, shape and surface texture of the bone fragments, they were able to confirm that two of the specimens are indeed dinosaur bones – a first for Ireland – and that they belonged to two completely different dinosaurs.

The theropods were a group of upright-walking, mainly meat-eating dinosaurs which includes Tyrannosaurus rex. They were “built for speed and for catching sluggish dinosaurs”, says Simms.

In contrast, “Scelidosaurus was a plant eater which was armour-plated to resist being eaten,” he says. Scelidosaurus, which carried armoured plates on its back, is thought to be an ancestor of armoured dinosaurs such as Ankylosaurus, tank-like dinosaurs with bony plates and spikes.

The size of the bones suggests these dinosaurs were small, roughly up to a couple of metres in length, compared with the ones that evolved later in the Jurassic period – about 201 to 145 million years ago, Simms adds.

The scientists also relied on high-resolution, 3D digital models of the fossils, produced by Dr Patrick Collins of Queen’s University Belfast, to analyse them.

The study shows “beyond reasonable doubt that these are dinosaur bones”, says Prof Maria McNamara, a palaeobiologist at University College Cork.

As for the remaining two specimens, the team has confirmed they are not dinosaur bones. They identify one as a piece of basalt and the other as part of a jaw of an Ichthyosaur, an extinct marine reptile with a long snout that looked like a dolphin.

“The original identifications should always be tested and it’s really good to test them with our up-to-date knowledge on bone morphology,” says McNamara.

The bones from Northern Ireland provide a tiny glimpse into the early stages of dinosaur evolution, says Simms, explaining that there aren’t many very early Jurassic (about 199 to 201 million year old) dinosaurs known from western Europe.

Most people imagine dinosaurs as similar to those popularised in the Jurassic World films, says McNamara, “but probably the most interesting part of dinosaur evolution is the early stages of their evolution because for over 100 million years these creatures dominated all terrestrial ecosystems at all levels of the food chain”.

“So the actual origins of those ecosystems are really interesting. It is something for us to be proud about . . . that our particular dinosaurs do come from these early parts of the evolutionary history of the group,” she says.

In the paper, which is published in the Proceedings of the Geologists’ Association, the authors playfully write: “Some might attribute the apparent absence of dinosaur remains from Ireland to the activities of St Patrick, whose apparent success in casting out snakes is well known but there is a more mundane explanation.”

The “great rarity” of Irish dinosaur fossils is in fact due to most of Ireland’s rocks being “the wrong age for dinosaurs, either too old or too young”, says Simms. Rocks of the correct age have been eroded away or covered up by other rock layers. Even where rocks of the right age are preserved, he explains, they were deposited in ancient seas or deserts and would not normally contain dinosaur remains because these animals mainly lived on land. We are “extraordinarily lucky” to have found these, he says.

The bones, taken to have been eroded out of marine rocks nearby, raise questions about the dinosaurs’ diet and death. The two dinosaurs “were perhaps swept out to sea, alive or dead, sinking to the Jurassic sea bed where they were buried and fossilised”, he says.

Prof David Martill of the University of Portsmouth, one of the study authors, says: “Scelidosaurus keeps on turning up in marine strata and I am beginning to think that it may have been a coastal animal, perhaps even eating seaweed like marine iguanas do today.”

Simms agrees: “Scelidosaurus liked the beach.” However, because we only have such a small amount of the skeleton, “it’s impossible to say how or why they died,” says McNamara. “We don’t know enough”, she says, “[to say] whether they were adapted to a kind of coastal lifestyle and coastal diets, or whether they simply represent bone material that was washed offshore during a storm or by a flood in a river.”

After being buried for 200 million years, the bones were discovered in the 1980s by the late Roger Byrne, a schoolteacher from Jordanstown, Co Antrim, and a keen fossil collector.

Byrne, who is named as co-author on the paper, found the bones lying among pebbles and boulders on a beach near the Gobbins, on the east coast of Islandmagee and donated them to the Ulster Museum, alongside many other fossils.

“He had an amazingly good eye. These are basically black pebbles on a beach that’s covered with black basalt pebbles. He spotted them and recognised that they were a bit different,” Simms notes. Byrne’s drawings of the bones are included in the paper.

“These fossils show that dinosaur specimens are out there,” says McNamara. “Now that we know we have dinosaurs in Ireland, it does open up the possibility of finding more.

“Ireland has a rich fossil heritage and there are resources available to learn more about this,” she adds, mentioning Geological Survey Ireland and the Burren and Cliffs of Moher Geopark, among others.

“It’s only by learning about life in the past and how life adapted to climatic and environmental changes in the past that we get a perspective on the current changes which life is experiencing. If palaeontology teaches us anything, it’s that life is resilient and it brings hope for the future,” she says.

The bones will be on display in the Ulster Museum’s Deep Time gallery as soon as Covid-19 restrictions allow its reopening.