X-ray techniques used on E.coli in push for new antibiotics 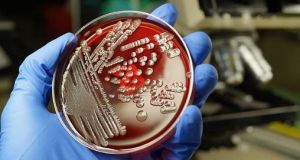 Bacterial species such as E. coli (culture above) cause infections in tens of thousands of patients every year. They have developed resistance to a plethora of first-choice drugs used to treat them. File photograph: Getty Images

Irish scientists have gained key insights into the molecular machinery deployed by two common disease-causing bacteria, including E. coli. This may make the creation of new drugs to inhibit them easier and help reduce instances of antibiotic resistance when trying to treat infections.

Led by Prof Martin Caffrey at Trinity College’s School of Biochemistry and Immunology, they used “next-generation X-ray crystallography techniques to look under the bacterial bonnet”. This has resulted in molecular blueprints that are likely to help to design drugs that specifically target the coat of the bacteria and do not interfere with the human immune system.

The research shows that a key enzyme used in making cellular proteins in Escherichia coli and Pseudomonas aeruginosa bacteria is remarkably similar in structure in both species – and yet has a key difference.

The findings are published in the leading journal Nature Communications. These bacteria infect people, especially those whose immune system is compromised, and can cause fatalities.

Prof Caffrey said: “The structural blueprints of the two bacteria – while very similar – differ in their fine detail. These subtle differences might be exploited to design species-specific therapies with a reduced likelihood for the development of antibiotic resistance.”

Both bacterial species cause infections in tens of thousands of patients every year. They have developed resistance to a plethora of first-choice drugs used to treat them.

With antimicrobial resistance on the rise, the World Health Organization has advised “a post-antibiotic era”, in which minor injuries and common infections could prove fatal, is looming.

New drugs are badly needed, and while the new blueprint of the bacterial enzyme known as “Lnt” offers hope for drug development, the process of creating effective candidates is not an easy one, Prof Caffrey said.

Similar enzymes are present in humans and other animals, so any drug would need to be sufficiently specific to only affect the bacterial enzyme, he said.

The biological structure of any drugs that would bind to the bacterial enzymes and inhibit them is likely to be similar to the structure of molecules that inhibit the innate immune response. “In other words, stopping the bacteria in its tracks may also slow the body’s natural response to infection,” he explained.

Speaking about the difficulty in designing “silver-bullet” drugs that could turn the tide, and about the next steps in his team’s work, Prof Caffrey added: “The structural blueprints generated as part of this study provide a basis whereby the differences between the bacterial enzyme and the immune response proteins might be exploited with the goal of producing a drug that only hits the bacterial target.”

The research was supported by funding from Science Foundation Ireland and Ireland’s High-Performance Computing Centre.

Meanwhile, the EU has awarded €2.5 million to a Galway company which is developing technologies to counter antibiotic-resistant bacteria.

Westway Health was set up in 2012 to commercialise a breakthrough antimicrobial technology developed in NUI Galway’s School of Natural Sciences.

The company is bringing to market a product for use in the dairy sector, but its novel antimicrobial technologies have a range of applications beyond animal health, including human health and environmental sterilisation. The funding will be used to develop its product for treatment of bovine mastitis.

“This could return healthcare to a pre-antibiotic era, where common infections can become fatal. Our solutions are proving effective against all microorganisms we have tested, including antibiotic-resistant bacteria such as MRSA.”

Antibiotic resistance is putting the achievements of modern medicine at risk, the WHO warned recently.

Organ transplantations, chemotherapy and surgeries such as caesarean sections become much more dangerous without effective antibiotics for the prevention and treatment of infections, it added.