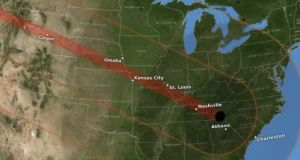 The 2017 path of the Great Americian Eclipse which will be seen on August 21st. Source: NASA

Next Monday, August 21st, the shadow of the Moon will bring a two-minute spell of darkness as it sweeps across the United States along a path from Oregon to South Carolina. The eclipse is one of a series known as Saros 145.

If the Moon moved in the plane of the Earth’s orbit about the Sun, we would have a solar and a lunar eclipse each month. But the Moon’s orbital plane is tilted by about five degrees. For a solar eclipse, the Moon must pass between Earth and Sun, with the three bodies in a line. This can happen only at points called nodes, where the orbital planes intersect. The Moon passes through two nodes every month, but normally these are not located directly between Earth and Sun, so no eclipse occurs.

For more than 2,500 years, astronomers have observed a regularity in the pattern of eclipses. From time to time the geometry of the Earth-Moon-Sun system is repeated to the extent that solar and lunar eclipses can be predicted: once the date and time of a particular eclipse is known, it is possible to predict similar events by extrapolating forward in time. The dominant period is Saros, recurring every 223 lunar months or about 18 years (more precisely, 18 years 11 days eight hours).

Suppose we start the clock at a solar eclipse: the Moon is new and at a node. In a period called a draconic or nodical month, averaging 27.21 days, the Moon orbits the Earth, returning to its original position relative to the stars. But the Sun has moved on, so we have not reached the next New Moon. Realignment with the Sun occurs a few days later, but now the Moon is no longer at a node, so there is no eclipse. The time for the Moon to return to the same position relative to the Sun is called a synodic month, lasting 29.53 days.

Eventually, a time is reached which is both a whole number of nodical months and a whole number of synodic months. Then the Moon is back between Earth and Sun and at a node, so another solar eclipse occurs. It turns out that 242 nodical months is close to 223 synodic months. Both are of duration 6,585 days or about 18 years. This is the Saros period.

To complicate matters, the Moon must be close to Earth (near perigee) to fully block the Sun’s light. Perigees recur every anomalistic month or 27.55 days, and it turns out that 239 such months fit the pattern of the Saros beautifully.

The time of day for each eclipse is eight hours later than the one before, so it is displaced about one third of the way around the Earth. This explains why an eclipse over the United States in 2017 follows one over Europe in 1999. A range of maps of the eclipse is available on the NASA site – eclipse2017.nasa.gov

For those looking to add to the mathematical side of life, booking is open for an evening course, Sum-enchanted Evenings, online at ucd.ie/all/study – or by phone (01- 7167123).