Eclipse-watchers in Depoe bay, Oregon cheered wildly as the moon blocked out the Sun in the first coast-to-coast total solar eclipse in the United States in nearly a century began. Video: Reuters 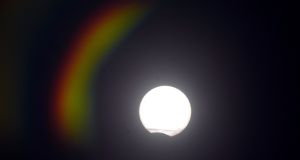 The clouds cleared for just long enough in Dublin on Monday evening for celestial observers to catch a glimpse from across the Atlantic of the so-called “great American eclipse”.

The small group of viewers which had gathered outside the Astronomy Ireland’s headquarters in Blanchardstown, Dublin, went away happy as they managed to sneak a peek at a chunk less than a tenth the size of the sun’s surface just barely darken the skies for a few minutes.

The phenomenon could be seen as a total eclipse from 14 mainland states in the US, but it was somewhat less dramatic from Ireland, with onlookers in Kerry the best positioned to see the moon obscure about an eighth of the sun’s light.

Charlie Bracken from Swords was considering staying at home and attempting to catch the event out the back garden with his children Flynn (5) and Eva (8), but he was glad to get the use of some of the heavy-duty equipment available at the viewing party.

“It outweighed my expectations. I expected it just to be cloudy and to see nothing. We were in two minds about whether to come because of the kids. We were going to stay at home and watch it out the back garden. But how lucky were we that the clouds cleared just at the last minute,” he said.

“It was really cool. I saw it through the glasses,” added a satisfied Eva.

Monday’s display was the best that domestic stargazers can expect for quite some time, with the next total eclipse of the sun by the moon not due in Ireland until 2090.

Sightings were reported to be good in locations across the country, although northern areas remained blanketed in cloud for much of the evening.

“It filters out 99 per cent of the heat of the sun or else your eye would just burn looking at it,” he explained to the uninitiated.

The eclipse hit a happy window of opportunity in Dublin at least, beginning at around 7.38pm just as the clouds cleared and peaking just after 8pm before the dark skies again closed in, according to Astronomy Ireland volunteer Laura Totton.

“It was raining and it was cloudy all day, and I thought we’re not going to see anything. Initially when we came and set up it was cloudy, and we were going ‘please let it just clear, just a little bit’. And literally just as it started the clouds just cleared.”

The organisation’s chairman, David Moore, was one of around 30 Irish people who travelled to Nashville, Tennessee, where they managed to catch the full eclipse in a so-called “corridor of totality” which is just 110km wide.