A total solar eclipse will pass over the US in just over 90 minutes on Monday. The astronomical event could cause a huge loss in solar energy production. Video: Reuters/ NASA 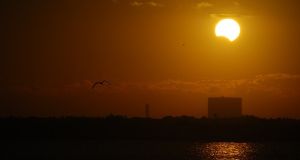 An approximation of how Monday’s eclipse will look from Ireland – weather permitting.

Many parts of the United States will darken on Monday due to a rare cosmic coincidence as millions witness a total solar eclipse. The astronomical event of the decade will involve two minutes of darkness.

For those in Europe, it will not be quite as spectacular but Ireland will experience the full passage of a partial eclipse shortly before sunset. A total solar sclipse has not been seen on Irish soil since 1727, and the next one is due in 2090.

“From our viewpoint, the Moon will move over the lower left edge of the Sun, covering about 5 per cent of it, before completely moving off it again; it will take about 45 minutes from start to finish,” said Dr Ray Butler of NUI Galway Centre for Astronomy.

“We are in a better position than England and Wales, almost all of whose inhabitants will not see the full duration of the partial eclipse – the Sun will set for them before the Moon has moved away from it, and the whole event will be lower in their sky and more likely to be obscured. Scotland does experience the full duration of the partial eclipse, but amount of Sun obscured will only be about 2 per cent.”

A total solar eclipse occurs when the moon passes between Earth and the Sun, blocking views of the Sun. If standing in the moon’s shadow on Earth, you will see the sky darken and feel the temperature drop. The place where the Sun should be will look like a black circle in the sky.

Wherever viewers are in Ireland, the partial eclipse will start at around 19:38, peak at around 20:03, and end at around 20:27. Timings vary with location: earlier in the northeast, later in the southwest.

One astronomer has predicted the eclipse in the US will be the “most photographed, most shared, most tweeted event in human history.”

Strictly speaking “totality” is only visible along a track starting in the Pacific Ocean midway between the US and Japan, passing in a sweep from Oregon to South Carolina and ending in the mid-Atlantic Ocean. It’s the first eclipse to cross the entire continental US in almost a century.

The 70-mile-wide, 3,000-mile-long swath that lies directly in the shadow of the moon is called “the path of totality.” Because the moon orbits around Earth so quickly (at a pace of 2,100 miles per hour), each spot on the path will experience only about two minutes of totality.

The best viewing arrangements are almost as deliberated upon as the latest Trump tweet. But it’s not possible to chase the shadow around the country – it will cross the entire US in about 90 minutes; faster than the speediest jetliner.

Weather indications for Monday are complicated by the remnants of Hurricane Gert expected over the weekend. It will bring slow moving fronts which means cloud and spells of rain, according to forecaster Deirdre Lowe of Met Éireann. Clear conditions are likely either side of the fronts with southern areas having the best chance of a clearance. It will be warm and as a result may be misty around western and southern coastal areas.

The Sun may not be at its strongest but the usual risk of eye damage from direct viewing applies, Dr Butler added. People should not stare at the Sun or use optical instruments such as binoculars or telescopes without appropriate filters.