Skygazers were treated to a spectacular display of celestial fireworks overnight as the Earth flew through a cloud of cometary dust. This time-lapse was taken above an abandoned coal mine in Bosnia and Herzegovina. Video: Reuters 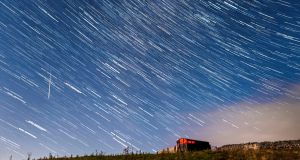 Digital composite of 30 photographs taken over a period of 15 minutes. A meteor and star trails during the Perseid meteor shower seen from near Hawes in the Yorkshire Dales National Park, as the Earth flies through a cloud of cometary dust creating a spectacular display of celestial fireworks. Photograph: Danny Lawson/PA Wire 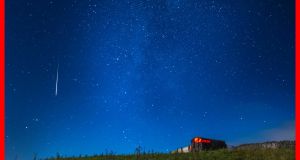 A meteor during the Perseid meteor shower seen from near Hawes in the Yorkshire Dales National Park. Photograph: Danny Lawson/PA Wire 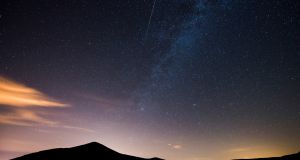 A meteorite of the swarm of meteorites Perseida burns up in the atmosphere next to the Milky Way early 13 August 2017, over San Miguel de Aguayo, Spain. Photograph: Pedro Puente Hoyos/EPA

Skygazers were treated to a spectacular display of celestial fireworks overnight as the Earth flew through a cloud of cometary dust.

The Perseid meteors, shed by comet Swift-Tuttle, stage their show every August and are among the brightest of all shooting stars.

A clear sky and some good cloud breaks gave many an opportunity to spot the meteors during the early hours .

Streaking flashes of light were pictured online in the sky above Co Waterford while online footage from Celbridge, Co Kildare shows more than a dozen meteors lighting up the skies.

The meteors, mostly no bigger than a grain of sand, burn up as they hit the atmosphere at 58 kilometres (36 miles) per second to produce a shooting stream of light in the sky.

Seen from the Earth, the Perseids appear to originate from one place in the north-east known as the “radiant” which happens to be near the constellation Perseus.

Because the density of the dust cloud varies, the meteors are not evenly spaced out. At certain times they can be close together and at others seem to disappear.

The Perseids were the first meteor shower to be linked to a comet when astronomer Giovanni Schiaparelli spotted their association with Swift-Tuttle in 1862.

The comet orbits the sun every 135 years. As the Earth crosses its orbit, it ploughs through some of the debris left by the icy object on previous visits. None of the particles are big enough to avoid destruction and reach the ground.

While the meteor shower peaked on Saturday night it will continue until at least Monday night.