Perseids meteor shower: How and where to see this weekend's shooting stars

Skygazers were treated to a spectacular display of celestial fireworks overnight as the Earth flew through a cloud of cometary dust. This time-lapse was taken above an abandoned coal mine in Bosnia and Herzegovina. Video: Reuters 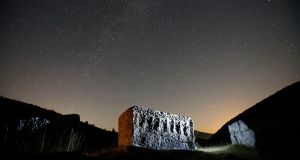 Stars and meteor streaks are seen behind a medieval tombstone in a Bosnian village late on Friday. Photograph: Amel Emric/PA

Whether you’re a budding astronomer equipped with binoculars and a telescope, a loved-up couple looking for a romantic way to spend a summer night or a family on a camping-holiday desperate for something to occupy the kids, tonight’s the night to look up and count those shooting stars.

On Saturday night, the skies above Ireland are set to be filled with thousands of shooting stars as the annual Perseids meteor shower reaches its peak. While this year’s display of night sky fireworks may be slightly obscured by a particularly bright moon, star gazers can still expect to see dozens of stars streaking across our skies.

The Perseids meteors, shed by comet Swift-Tuttle, stage their show every August and are among the brightest of all shooting stars. This year, as many as two of the streaking flashes of light may be visible every minute, given a good location and clear skies.

“Because the moonlight is up you’re probably as good watching in your backyard in the suburbs as you are in the countryside,” said David Moore, chairman of Astronomy Ireland, adding that the best time to watch for stars would be between midnight and 4am on Sunday.

“This year the moon will drown out the faint stars so instead of seeing one or two shooting stars every minute, you might only see half of this. The moonlight can create a haze and reduce the number of shooting stars you see.”

Asked if he was expecting clear skies for the night, Mr Moore said Irish astronomers tend to ignore the forecast given the unpredictable nature of our weather. “In this case cloud cover is what is important and it’s very difficult to predict cloud cover, it can vary from kilometre to kilometre.”

He added that while the meteor shower will peak on Saturday night, its shooting star display will continue until at least Monday night.

Astronomy Ireland is calling on members of the public to count how many stars they see in a 15 minute period and email stars@astronomy.ie with their name, location and the night they watched the sky. “There aren’t enough professional astronomers here to record the starts so it’s down to the general public to count every 15 minutes,” said Mr Moore.

The meteors, mostly no bigger than a grain of sand, burn up as they hit the atmosphere at 58 km per second to produce a shooting stream of light in the sky.

Seen from the Earth, the Perseids appear to originate from one place in the north-east known as the “radiant” which happens to be near the constellation Perseus.

Robin Scagell, vice president of the Society for Popular Astronomy, advises people not to look towards the radiant, but to direct your gaze in the opposite direction.

“The Perseids can be very bright and often quite spectacular,” said Mr Scagell. “Some meteor showers are slow, but we are moving into the Perseid stream so they are coming at us quite swiftly. I think under good conditions you might see one or two a minute, probably more towards Sunday morning rather than Saturday.”

The Perseids were the first meteor shower to be linked to a comet when astronomer Giovanni Schiaparelli spotted their association with Swift-Tuttle in 1862.

The comet orbits the sun every 135 years. As the Earth crosses its orbit, it ploughs through some of the debris left by the icy object on previous visits. None of the particles are big enough to avoid destruction and reach the ground.