How comedy and drama can help communicate complex scientific theories 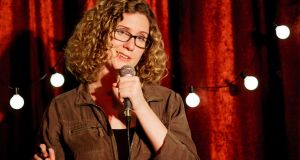 Can you imagine a group of academics sharing their research in a stand-up comedy routine in a packed pub? Well, you don’t have to imagine it because that’s what happens in the Bright Club, an innovative science communications initiative in which academics joins stand-up comedians in bars in Dublin, Galway and other cities around the world.

The initiative was brought to Ireland by American physicist Jessamyn Fairfield, who turned her improvised comedy routine into a science communication tool while doing her post-doctorate research in the Advanced Materials and Bio-Engineering Research (Amber) centre in Trinity College Dublin.

In 2016, Fairfield moved to NUI Galway as a lecturer and researcher into nano-materials and has since taken her public engagement with science several steps further. For instance, she organises Soapbox Science sessions in Galway in which female scientists give short talks about their work in public places and in December, 2017, she gave a TEDx talk in the Technical University of Munich at an event, entitled “Reformations of Tomorrow”.

“My dad used to say that if you can present scientific results and crack a joke about them, it shows you are really confident about your work. Science and comedy are both creative – they are about thinking outside the box, not accepting the status quo,” explains Fairfield.

But, it’s more than that. According to Fairfield, comedy holds a unique element that works superbly for scientific communication. “Sometimes, people zone out when you’re talking to them or they spend their time preparing their own mental response but with comedy, you have to stay tuned in for the punch-line. The idea [for researchers in stand up comedy] is not to make fun of research but to find out what’s funny in it,” she explains.

One of the main difficulties scientists face communicating their research is using jargon words that most people don’t understand. “The key is to send your work to someone not in your field who’ll be honest with you about what they do and don’t understand,” she says.

The second most common difficulty with communicating science is that some words mean different things to scientists and the general public. “So when scientists talk about the theory of evolution, it doesn’t mean they don’t think it’s true. They just mean that it hasn’t been dis-proven and that there isn’t any tick-box to check evolution is correct. But the public view a theory as something you’re guessing at and you’re not sure of.”

In her own case, Fairfield got excited about the laws of physics and how quantum mechanics jarred with how we understand the world. “It was so confusing and bizarre so I wanted to understand why it was that way and what kind of devises you can build to understand astronomy and dark energy,” Her short Youtube video, Small World, explains this quantum world for a lay audience. “It’s also important that public engagement with science is a two-way communication between scientists and the public – that there is listening on both sides because scientists can also get research ideas from the public,” she adds.

The value of storytelling in communicating the complicated messages of climate science was the theme of the Environmental Protection Agency’s annual public lecture by climate scientist, Prof Chris Rapley in October, 2017. In his presentation, Communicating Climate Science:Why So Difficult? Prof Rapley said that academic lectures work in the “information deficit mode”, presenting facts, information and evidence logically. “We do this as dispassionately as possible to demonstrate that we have done a proper, honest job in weighing up the evidence to come to a rational, balanced and defensible conclusion,” he said.

However, late in his career as a climate scientist, Prof Rapley realised that people process complex information much better through stories which led him to write (with playwright, Duncan Macmillan) and perform the dramatised lecture, 2071, in the Royal Court Theatre, London. “It was more powerful than the classic way to tell stories and dealt with emotions and ideological stuff in a safe space. Presenting the evidence for climate change in an absorbable way allowed people to consider the ethical, political, economic and social questions around climate change,” he said.

Engineer turned actor and science communicator Niamh Shaw gave up her academic career in science because the creative part of her mind was “screaming out for acknowledgement and expression”.

But, curiously, the more she got involved in acting, the more she realised that her ability to communicate scientific knowledge was a talent she could merge with her new career. “I realised that I could talk about things like why the sky is blue, how the Moon impacts on Earth and even the biochemistry of love,” explains Shaw.

This led Shaw to create performances pieces including That's About the Size of It (about atoms), and To Space (about confronting her dream to go into space) which toured to the Edinburgh Fringe in Scotland, the Adelaide Fringe in Australia and the Cheltenham Science Festival.

Her new show, Diary of a Martian Beekeeper (see panel below) has emerged from her experience in a nine-week space research programme in Ohio in 2015, a simulated Mars mission in the Utah desert in 2017 and experience of a zero gravity flight at the Gagarin Cosmonaut Training Centre in Star City, Moscow, Russia.

Shaw is also the artist in residence at the Cork Institute of Technology Blackrock Observatory, Cork. “I became more interested in the team of people who make space travel possible. The job of the astronaut is to conduct experiments for institutes, companies and universities all over the world. Then, I realised that there is a parallel between the team of space researchers and a bee colony because the colony make the decisions and keep track of the queen bee like researchers do for an astronaut.”

And as well as communicating science through drama, Shaw has another mission – which is to make us appreciate our own planet more. “Mars is such an inhospitable place that it would be a terrible thing to have to inhabit it. We need to understand that life on Earth is better.”

Science at a theatre, bar or public square near you

The Bright Club
The Bright Club is a club where academics from the sciences and humanities share their research in a stand-up comedy slot alongside stand-up comedians. The comedy events in Ireland are held in Whelan’s pub, Wexford Street, Dublin and the Black Gate Cultural Centre, Francis Street, Galway. The next one is in Whelan’s pub on February 27th at 8pm. See brightclub.ie

Diary of a Martian Beekeeper
Smock Alley Theatre, Dublin from March 13th-16th at 7.30pm
Actor/Science communicator Niamh Shaw performs a one-person show about a hypothetical mission to Mars in 2036. The show is inspired by Elon Musk’s grand design for a future interplanetary civilisation, testimonies from European Space Agency employees and Niamh Shaw’s own space journey. More information at smockalley.com

Soapbox Science
Soapbox Science is an international public outreach platform, promoting women in science. It was founded by UK-based research biologists, Doctors Seirian Sumner and Nathalie Pettorelli. Its main focus is short public talks by women scientists in public places. The next one in Ireland will be at the Spanish Arch, Galway City on July 7, 2018. See  soapboxscience.org

Pint of Science
This international initiative brings scientists into the local pub to talk about their work to a lay audience. It was founded in 2012 by Dr Michael Motskin and Dr Praveen Paul, research scientists at Imperial College London. See pintofscience.com and pintofscience.ie