The Library of Babel and the information explosion 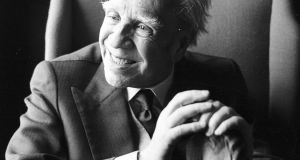 The Argentine writer Jorge Luis Borges in Dublin, where he attended an international Joyce symposium in 1982. Photograph: Eddie Kelly

The world has been transformed by the internet. Google, founded just 20 years ago, is a major force in online information. The company name is a misspelt version of “googol”, the number one followed by one hundred zeros. This name echoes the vast quantities of information available through the search engines of the company.

Long before the internet, the renowned Argentine writer, poet, translator and literary critic Jorge Luis Borges envisaged the universe as a vast information bank in the form of a library. The Library of Babel (1941) was imagined to contain every book that ever was, or ever could be, written.

Mathematical concepts influenced the structure and style of many of Borges’ short stories. They included Cantor’s set theory, orders of infinity, paradoxes, logic and topology. His knowledge of mathematics corresponded approximately to basic first-year university level, comparable perhaps to the mathematical understanding of James Joyce.

Borges’ short stories are infused with mathematical elements and concepts. In The Garden of Forking Paths, he considers the nature of time, and the innumerable branch points that determine our future. Treating all possible options at each branch-point leads on to the concept of a multi-verse, or the many-worlds interpretation of quantum mechanics. Borges’ story The Aleph speaks of a point in space that contains every other point. Viewing it, we can see everything in the universe from every possible angle.

Borges’ Library of Babel comprises a gigantic collection of books, each having 410 pages, with 40 lines on each page and 80 characters on each line. Thus, there are 410 x 40 x 80 = 1,312,000 characters in each book. The library contains every possible book of this form, that is, one book with each of the possible orderings of the characters. Borges used an alphabet of 25 letters, so the total number of books is 25 raised to the power 1,312,000. This corresponds approximately to two followed by 1.8 million zeros, an unfathomable number. No matter if a book is lost: there are more than 30 million others that differ from it by only a single character.

The library is divided into hexagonal galleries, in each of which four walls are lined with books, the remaining two providing access to other rooms. Borges writes that the library is a sphere whose exact centre is any hexagon and whose circumference is unattainable. This leaves some ambiguity and scope for speculation about the “cosmology” or large-scale structure of the library.

The story contains many of the signature themes of Borges: infinity, paradox, labyrinth, and self-referential reasoning. A library with all possible books arranged randomly is essentially useless, as valid information is swamped by multitudinous tomes of gibberish. The order of the books is random and a catalogue of the Library would be of complexity and extent comparable to the Library itself. The librarians have an unenviable – and essentially impossible – task.

The internet has expanded by a factor of a thousand since the beginning of the millennium and more then half the world population is now online. As data volumes continue to grow, ever-smarter mathematical filtering algorithms are needed to prevent information overload or “data deluge” and to avoid the noisy nightmare imagined by Borges.