No pause in warming of oceans, new studies warn 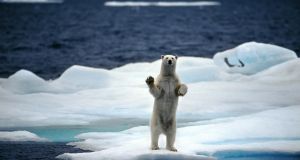 Arctic Ocean: There is no doubting the reality of human-induced climate change, says Prof Brian Ó Gallachóir, professor of energy policy and modelling at the environmental research institute at UCC. Photograph: Arterra/UIG via Getty Images

New studies have revealed there has been no pause in the warming of the world’s oceans, which have continued to heat up relentlessly for the past 75 years.

A number of earlier studies suggested there had been a “hiatus” in ocean warming, although it could not easily be explained.

However, this view has been overturned by studies released on Wednesday night that confirm ocean temperatures have gone up steadily due to climate change and there has been no pause.

The research findings from the universities of York and California Berkeley were published by the journal Science Advances.

Scientists were left without adequate answers when ongoing monitoring suggested a break had occurred in ocean warming, despite the steady warming recorded over land.

Climate change detractors pounced on the contradiction, claiming it showed global warming was a myth.

Even the International Panel on Climate Change accepted the notion of a “global warming hiatus”.

A powerful challenge to this view was put forward in 2015 by the US National Oceanic and Atmospheric Administration (NOAA). Its analysis published in Science showed the warming had been concealed by the various ways it was measured, including ocean buoys and ship on-board systems.

This paper suggested there was an inbuilt “cold bias” that was confounding the measurements. It showed that ocean buoys tended to report slightly cooler temperatures than older ship-based systems. This in turn had hidden some of the actual warming, the administration said.

Researchers were initially sceptical of the administration’s result, said Dr Kevin Cowtan of the University of York. “So we set out to test it for ourselves, using different methods and different data. We now think NOAA got it right, and a new dataset from the Japan Meteorological Agency also agrees.”

The US/UK team simplified things by not blending the readings, said Zeke Hausfather of University of California Berkeley. They kept buoy data separate from satellite data and separate from ocean- anchored Argo floats “so there was no mixing and matching of instruments”.

When studied separately each data set matched the original NOAA findings that ocean temperatures have warmed without pause by a steady 0.12 degrees per decade since the middle of the 20th century.

This is almost twice as fast as earlier estimates of a 0.07 degree per decade rise.

There has been no global warming hiatus and climate change continues without interruption in our oceans and over land, according to the new studies.

Even if a pause had occurred there is no doubting the reality of human-induced climate change, said Prof Brian Ó Gallachóir, professor of energy policy and modelling at the environmental research institute at University College Cork.

“Events like this don’t detract from the main body of evidence, which suggests we have an increase in man-made global warming,” he said.

1 Man found guilty of murdering girlfriend during drinking session
2 Postmortem results on mother and two children found dead in Dublin due on Friday
3 Cork shootings: Father and sons to be buried in two separate funerals
4 First full moon on Halloween night since 1955 will be rare ‘blue moon’
5 The real Contagion virus is out there and it’s causing virologists to worry
Real news has value SUBSCRIBE

New evidence emerges in shooting dead of teenager in Belfast in 1972 01:00
Study finds retail workers serving customers have fivefold risk of Covid-19 23:55
IMO to consider ballot for industrial action when it meets on Friday 22:35
Restrictions on religious services to stay after archbishops meet Taoiseach 21:52
Postmortem results on mother and two children found dead in Dublin due on Friday 21:28