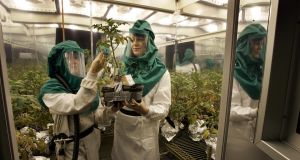 Prof Jennifer McElwain (right) and Dr Claire Belcher, with plants in a carbon dioxide atmosphere chamber, as part of the programme for experimental atmosphere and climate, at UCD Thornfield. Photograph: Eric Luke

You are a paleobotanist – what does that mean?

“Paleo” means old and “botany” means the scientific study of plants. So I study fossil plants, many of them older than the dinosaurs. These ancient plant remains can tell us a lot about climate change in the past.

Where is the most interesting site that you have collected plant fossils?

We collected more than 4,500 fossil plants and spent the next decade trying to piece together the ancient landscapes that the fossils revealed, and how plants in the past responded to natural global warming events caused by volcanism.

How do you figure out ancient plant survival tactics?

Your work has recently shown that carbon dioxide levels were closely linked with ice-sheet changes on Earth 300 million years ago – what can we learn from that today?

Our climate is changing at a faster pace today than ever before in geological history, because human impact results in more greenhouse gasses like carbon dioxide being released into the atmosphere.

Our studies of past climate [funded by the European Research Council and published in Nature Geoscience] show that polar ice sheets become unstable as the level of carbon dioxide in the atmosphere increases above about 0.05 per cent. Today there is 0.04 per cent carbon dioxide in the atmosphere. We are getting worryingly close to the 0.05 per cent threshold above which ice sheets will become unstable and begin to melt.

What do you like to do when you are not working on research?

Spending time with my family. I also love buying and making pottery, baking with the kids and finding unwanted furniture in skips and bringing it back to life.

What is the message arising from your research for citizens of Earth in the 21st century?

We only have one Earth. Let’s try not to soda-stream the atmosphere, otherwise there will be no polar ice left.