Most astronomers are sceptical about the existence of Planet Nine, but mathematical models suggest there is something unseen out there 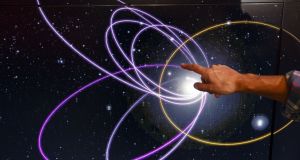 Astronomers were shocked last January when a research team floated the possibility that there might be an as yet undiscovered large planet lurking far out at the distant edge of the solar system.

Almost 12 months on, we still don’t seem to be any the wiser about what is being called Planet Nine or whether it even exists. So far most astronomers are sceptical, but the mathematical models used to predict the new planet continue to suggest that there is something unseen out there, something very massive – equal to 10 Earth masses – and something whose gravity is causing strange effects at the edges of the solar system.

Although efforts to spot the object continue, this is a huge challenge given that it supposedly orbits 20 times farther from the sun than does the gas giant Neptune. Neptune orbits every 165 years, but it takes the mysterious Planet Nine about 17,000 years per orbit because it is so very far away.

This makes a direct observation very difficult, even using the world’s most powerful telescopes. But if it is so far away and can’t be seen, how do we know so much about it?

It comes down to the ability of mathematics to make predictions about things before they can be proven by experiments or observations.

Neptune was discovered using mathematical models. Its closer twin, Uranus, was discovered in 1781, but by 1800s astronomers were aware there was a wobble in its orbit, implying there was something else out there. John Couch Adams and Urbain Jean Joseph Le Verrier came to the same conclusion – that there was another big planet out there – using maths to pinpoint its location. Johann Gottfried Galle used this data to observe Neptune in 1846.

This approach is being repeated today after calculations by Konstantin Batygin and Mike Brown of the California Institute of Technology predicted there was another very heavy and very distant planet orbiting the sun.

But while some models support the idea, others do not. “The modelling suggests Planet Nine could not be possible,” says Kevin Nolan of IT Tallaght, who is Ireland’s representative of the International Planetary Society.

Planet Nine was proposed because of the unusual orbits of a cluster of bodies far beyond Neptune. Something is shepherding these objects, and the models support this, although without backing the idea of a Planet Nine.

“[To prove] the possibility of a planet of Earth’s size or greater, the models don’t work well,” says Nolan. “The models are strong enough to suggest that if a planet was out there we would see it, and we don’t see it.”

These objects could have been shepherded by something else, however; perhaps a massive object previously ejected from the solar system, says Dr Matt Redman, director of the Centre for Astronomy at NUI Galway. Planet Nine could have been pushed out of the solar system long ago, given a slingshot by some of the other giants such as Saturn or Jupiter.

“Our own solar system is remarkably neat. There are rocky planets, then gas giants, then icy bodies in the Edgeworth-Kuiper Belt. The idea of having a large planet out there doesn’t fit into that,” he says, although it would be “very exciting” if it were discovered.

If a large body were discovered, it could be a leftover from when the sun and planets were first forming, suggests Emma Whelan, who is setting up a planet formation group at Maynooth University. “The thinking is it is a core leftover from another planet and never became part of the solar system” but was just ejected by the gas giants.

It is not uncommon for “gravitational interactions” to do this or to cause apparent distortions in the orbits of other bodies in a solar system.

Astronomers like to reach a 99.5 per cent level of certainty that a given theory is true before supporting it. The possibility of a Planet Nine is nowhere near that, Dr Whelan says. “People are 60 per cent satisfied it is there.”

But it also shows us something else. “It really shows how little we know about our own solar system. We can observe these trans-Neptunian objects but truly the outer solar system is unknown.”

It takes the explosive death of a star to feed the recycling process that leads to the formation of a new solar system. “Supernovae enrich the interstellar medium and stars, and planets start to form and everything gets recycled,” says Dr Emma Whelan of Maynooth University.

If conditions are right, a revolving disc of material will form, with hydrogen accumulating in the emerging new star. Solid material may coalesce into rocky planets and lighter material into gas giants, and a solar system such as ours can emerge.

However, looking for planets orbiting in distant solar systems around other stars has shown us the variety that is possible.

“There are thousands of examples,” says Watson. “For example, most young stars start as pairs – 53 per cent form pairs,” she says.

The search for these extrasolar planets teaches us about the “huge diversity in planetary systems” and allows us to understand our own better, says Dr Matt Redman, director of the Centre for Astronomy at NUI Galway. “In a lot of solar systems there was major planetary migration; they moved around as they were forming.”

Gravitational tides shoved planets about, and some were slingshot by larger bodies, such as a satellite passing close to a planet, to gain a gravitational boost.

Planet Nine, if it exists, could have been pushed outside its original orbital perch to be ejected into its predicted orbit today.