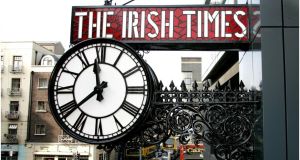 Every second counts - on New Year’s Eve, there’ll be an extra one. Photograph: David Sleator

Counting down to 2017 will take longer than usual this New Year’s Eve as clock experts compensate for a slowdown in Earth’s rotation.

To be precise, it will last an extra second.

Scientists at the National Physical Laboratory (NPL) are to introduce a “leap second” after 23:59:59 on December 31.

It will be the 27th occasion the NPL has brought in a leap second to ensure that time based on the Earth’s rotation does not lag behind time kept by atomic clocks.

The extra seconds are occasionally necessary because of unpredictable changes in the speed at which the planet turns on its axis.

Typically, they are added every two or three years, although the last one was inserted just 18 months ago in June 2015.

NPL, based in Teddington, London, is Britain’s national measurement institute and the birthplace of atomic time.

The laboratory is responsible for providing the UK’s national time scale — known as UTC(NPL) — which is controlled by atomic clocks that are among the most accurate in the world.

Peter Whibberley, senior research scientist with NPL’s time and frequency group, said: “Atomic clocks are more than a million times better at keeping time than the rotation of the Earth, which fluctuates unpredictably.

“Leap seconds are needed to prevent civil time drifting away from Earth time. Although the drift is small — taking around 1,000 years to accumulate a one-hour difference — if not corrected it would eventually result in clocks showing midday before sunrise.”

Leap seconds can be a headache for communication networks, financial systems and other applications that rely on precise timing, and must be programmed into computers to avoid mistakes.

The extra seconds are introduced in the last minute of either December or June, or rarely March or September.

It is also possible for a second to be removed from the UTC (Universal Co-ordinated Time) timescale, although this has never happened.

The International Earth Rotation and Reference Systems Service (IERS), based at the Paris Observatory in France, tracks the Earth’s rotation and announces when a leap second is needed roughly six months in advance.