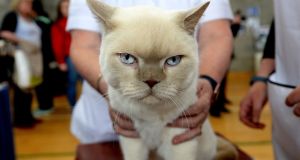 ‘The Irish Times’ has supported citizen science projects in recent years, including a successful national survey in 2015 to learn more about the genetics of cats. Photograph: Cyril Byrne

Citizen science comes with the potential to bring a wide variety of benefits to researchers; citizens, policy makers and society in research and innovation. It is a flexible concept which can be adapted and applied within diverse situations and disciplines across science and the humanities.

The European Commission has summed up its benefits: “It can accelerate and sometimes even make possible the production of new scientific knowledge; it can help policy-makers monitor implementation and compliance with regulations; it can increase public awareness about science and feeling of ownership of policies and it can enable faster and evidence-informed reactions to events and better territorial coverage.”

The Commission’s strong endorsement of citizen science is reflected in its support for such projects under Horizon 2020 the biggest EU Research and Innovation programme ever deployed, with nearly €80 billion of funding available over seven years from 2014 to 2020.

Over the coming months The Irish Times will be working with citizen science researchers to support some of the ongoing projects in Ireland, to generate research on six themes, and help to develop new ideas – and to facilitate participation by citizens.

The first of these new ideas is introduced online today. This initiative is being led by Trinity College Dublin, which has been to the forefront of developing citizen science research in Ireland in recent years – it is supported by the Environmental Protection Agency and Science Foundation Ireland through its Discover Programme.

The topics that will be introduced and researched over the next six months include the critical role of pollinators; attitudes to vaccination, geosciences, light pollution and environmental protection. They will be hosted online in The Irish Times science section.

There are obvious difficulties setting up citizen science initiatives, notably in terms of choosing optimum methodologies; quality assurance and validation of the outcomes.

Likewise, linking governance levels is necessary, such as from local to global. Ensuring balanced participation of citizens (eg regardless of background, gender and age) is critical – as is achieving integrity in methodology and the processing of data.

In addition, there is a need to recognise fully the work of citizens participating in citizen science initiatives while managing large numbers of volunteers for many months or even years (and keeping them motivated and responding to their questions).

In 2015, the European Citizen Science Association, led by the Natural History Museum in London, with input from many members of the association throughout the world, set out 10 key principles which it believed underlie good practice.

The first principle says citizen science projects actively involve citizens in scientific endeavour that generates new knowledge or understanding. Citizens may act as contributors, collaborators, or as project leader – and have a meaningful role in the project. The second says citizen science projects have a genuine science outcome. For example, answering a research question or informing conservation action, management decisions or environmental policy.

There is a strong thread of transparency and genuine participation threaded through the principles. Citizen scientists receive feedback from the project, including details of how their data is being used and what the research, policy or societal outcomes are.

Citizen science is considered a research approach like any other, with limitations and biases that should be considered and controlled for. However unlike traditional research approaches, citizen science provides opportunity for greater public engagement and democratisation of science. Results are published in an open access format. Data sharing may occur during or after the project, unless there are security or privacy concerns that prevent this.

Citizen scientists are acknowledged in project results and publications and programmes are evaluated for their scientific output; data quality, participant experience and wider societal or policy impact.

The leaders of citizen science projects are expected to take into consideration legal and ethical issues surrounding copyright, intellectual property, data sharing agreements, confidentiality, attribution, and the environmental impact of any activities

Citizen Science – science that involves people who are not professional scientists – is a broad term, according to Dr Joseph Roche, an astrophysicist and assistant professor in science education at TCD, who co-ordinated this series of projects. “It includes differing layers of contribution, collaboration and co-creation depending on the level of participation taking place between scientists and members of the public,” he adds.

For centuries citizens have been actively contributing to advancing scientific knowledge in some way. Even with the professionalisation of science in the 19th century, public volunteers still contributed to science through their observations of new stars, documenting of birds, collecting weather data and monitoring of water quality. The Irish Times has supported citizen science projects in recent years include a successful national survey in 2015 to learn more about the genetics of cats.

Online projects, like “Planet Hunters” led by Yale University, have resulted in groundbreaking achievements such as the discovery of new planets by citizen volunteers. Not only does this surge in public interest speed up scientific progress in certain research areas, but it can also bring additional benefits.

“By integrating citizen science projects into the classroom, teachers are helping their students to engage in active scientific research which provides an early insight into how science works. There is also growing evidence that involvement in citizen science can lead to positive impacts on the social well-being of participants by giving them a voice in science policy and decision making,” Roche points out.

The Commission has highlighted this aspect of “democratic” citizen science as a way of realising its vision of “science for the people, by the people”.

By working with scientists she was able to prove that the local water supply was unsafe to drink. This demonstrated how citizen science can empower people to take ownership of assessing dangers to their own health. But it also serves as a warning of the possible risks: the situation was exploited by a group called the Water Defense Organisation, an environmental group founded by Hollywood actor Mark Ruffalo.

It posed as a citizen science outfit offering to assist Flint residents in their time of need. Their water-testing methods were flawed and their claims that the water might be too dangerous to use in hand-washing and showering were unfounded. “Their interventions further jeopardised the health of local residents by scaring them into needlessly forgoing basic hygiene.”

To ensure citizen science remains a field that prioritises progress and opportunity, it is important that it is carried out in a responsible manner, Roche points out.

Ireland has a small but growing number of people working in citizen science, he notes, from dedicated research teams to local schools and community groups. The most successful citizen science projects depend on large numbers of people participating and are open to everyone, which he hopes will be a feature of the project being launched today.

Feedback, suggestions and questions are welcome at: info@citizenscience.ie