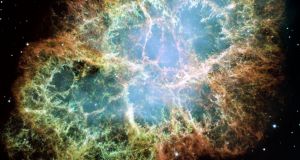 A photograph of a supernova explosion: after the star blows off the lighter material outside it packs down into a neutron star that becomes a pulsar.

People of old were more aware than we are of the night sky and took a keen interest in unusual happenings above them. The configuration of the stars was believed to be linked to human affairs and many astronomical phenomena were interpreted as signs of good or evil in the offing. The Three Wise Men or Magi were astrologers, experts in celestial matters, and would have drawn inferences from what they observed in the sky.

The Gospel of Matthew tells of the appearance of a star to guide the Magi to the place of the Nativity: “When they heard the king, they departed; and lo, the star which they had seen in the East went before them, till it came and stood over where the young Child was.” If taken literally, this indicates a miraculous event. However, many scholars have tried to explain the astronomical event in more rational ways.

We do not know with any certainty the year or the season of the Nativity. It is generally believed to have been between 5BC and 2BC. The Magi may have seen a spectacular meteor shower, which can indicate a definite direction, but this would bear little resemblance to a star. Comets are found in some renaissance paintings of the Nativity. Chinese astronomical records report comets in 5BC and 4BC. However, comets are normally associated with bad fortune and would hardly be taken to indicate an auspicious birth.

Was there a supernova, an exploding star that shines brilliantly for a few weeks or months? Supernovae in the Milky Way visible to the naked eye occur perhaps a few times every millennium. Such an occurrence would have been widely visible, and Chinese records show a new star that remained bright for two months in the Spring of 5BC. However, its position does not accord with the biblical account.

Another candidate is a planetary conjunction, when two or more planets appear close together in the sky. There are many intimate connections between the orbital times of the planets. For example, Jupiter completes five orbits of the Sun in the same time that Saturn orbits it twice. This is not a coincidence, but a planetary resonance, and the two planets exert regular periodic gravitational pulls on each other, reinforcing this resonance. There are numerous other resonances amongst the planets. As a result, conjunctions are more frequent than might otherwise be expected. There were a series of conjunctions in 6BC and 5BC.

It is remarkable that, by solving Newton’s equations of motion on a computer, we can calculate precisely the positions of the planets for thousands of years in the past and the future. With modern simulation software we can reconstruct the configuration of the solar system around the time of the Nativity. Computations indicate that in 2BC Jupiter and Venus were so close to the same point in the sky that they could have appeared to the naked eye as a single bright beacon. This has been proposed to explain the Star of Bethlehem.

The Magi travelled first westward to Jerusalem and then, after meeting Herod, southward to Bethlehem. It is reasonable to speculate that two separate astronomical events occurred, one when they first set out from the East, the other perhaps months later when they left Jerusalem. Since resonance results in planetary conjunctions that occur in clusters, these planetary alignments may explain what is reported without appeal to a miracle.