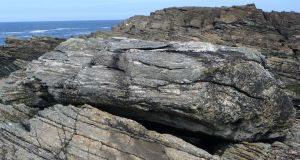 A large boulder deposited at Annagh Head in Co Mayo. 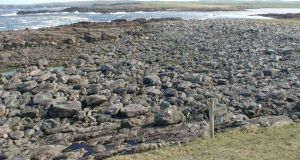 The deposit of boulders in North Co Mayo, some of over 50 tonnes, which were thrown onto the foreshore due to a storm surge. 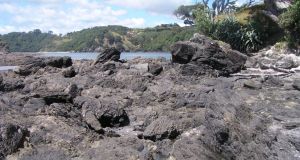 Boulder deposits on the coastline of the North Island, New Zealand, caused by a tsunami millions of years ago.

Spectacular boulder deposits on the Co Mayo coast and parts of the western seaboard were caused by ferocious Atlantic storms - and not an unknown tsunami - long in Ireland’s geological past, a study has concluded.

Geologists from NUI Galway and Oxford University published research comparing the Irish coastline with a location in New Zealand known to have been ravaged by a tsunami millions of years ago.

The scientists conclude that giant waves, more than 30m in height, generated sufficient power to propel enormous boulders – some over 50 tonnes – onto the Irish foreshore, and in some instances up over cliffs of considerable height.

Prof Paul Ryan from NUIG and Prof John Dewey from Oxford, who are retired, carried out the research that proves the boulder deposits of Annagh Head in Co Mayo were caused not by an unknown tsunami but by Atlantic storm waves breaking against the shore for hundreds of years.

The findings were published this week in the leading journal Proceedings of the National Academy of Sciences.

The boulders are piled on the foreshore or the top of small cliffs in a deposit called a boulderite, and are evidence of the power of extreme waves, they note. “This study shows the enormous power of storm waves battering the foreshore over centuries, ripping boulders of over 50 tonnes from the cliff face, piling them 100 metres or more inland,” said co-author Prof Paul Ryan from NUIG School of Natural Sciences.

In 2004, the late Prof Mike Williams of NUIG argued that boulders on the Atlantic cliffs of the Aran Islands were due to storm waves, which caused considerable international debate at the time.

In an attempt to resolve this controversy Profs Dewey and Ryan compared two deposits: a tsunamite deposit in New Zealand dating from the 10 million-year old Miocene period and the present-day boulderite at Annagh Head.

The North Island of New Zealand contains boulders in excess of 140 tonnes, which were produced by a 12- to 13 metre-high tsunami within a period of about one hour; equivalent to the tsunami that hit Japan in 2011.

The researchers combined oceanographic, historical, and field data to argue boulderite at Annagh head “is a cliff-top storm deposit”.

A computer simulation of a cliff-top storm deposit was developed that showed boulder shape, in addition to density and dimensions, should be taken into account when analysing how such deposits are produced in extreme coastal storm conditions.

The model also predicted northeast Atlantic storms, which historically have produced waves of over 60 metres, are capable of producing boulderites that cannot be distinguished from tsunamites when size alone is considered. But comparing and contrasting these two deposits helped identify their origins.

“Climate change means our shorelines are becoming more vulnerable, and the ability to read these piles of boulders will help us understand how much more vulnerable,” Prof Ryan added.

“We all know tsunamis are frightening. I think it’s less well-appreciated how frightening storms can be,” he added.

Given that storms are predicted to increase in both number and intensity in the future, “full understanding of the power of waves and their effect on coastal communities is really, really important”.

Prof Dewey said: “The triple junction between land, sea and air is perhaps the least well understood in the Earth sciences. We should pay greater attention to our shores.”