The importance of a good hedgerow 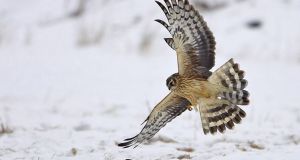 Hen harrier in flight. From a bird’s perspective, a good hedge is one that is the right height and width, with trees and shrubs to provide berries and tall branches on which to perch and pose to attract a mate. Illustration: Richard Mills

Petrichor, the smell that rain makes when it falls on dry soil, is the smell of relief. Right now, the first showers in weeks are bringing welcome drops of respite to my parched garden. I can only imagine how the farmers feel.

If there ever was a moment to clarify the extent to which Ireland’s agrifood sector depends on a stable climate and a healthy ecosystem, this is it. The flooding, freezing and baking we’ve experienced this year have put the people who make a living from the land under huge strain – not to mention the land itself – and everything that lives on and in it.

It’s not news that such extremes are the likely consequences of a changing climate. It’s not news that the web of life, our biodiversity, is one of the most important safety nets we have in mitigating the worst of the impacts. Nor is it news that our biodiversity is in serious decline – a “death by a thousand cuts”, as an ecologist friend recently remarked. All of these positions are well evidenced in scientific literature and broadly accepted (in principle, at least) by policymakers.

Yet it was without a hint of irony that, within days of Ireland leading the world to become the first country to divest from fossil fuels, we chose to make it even easier to quite literally hack away at nature’s safety net by extending the hedge-cutting and upland burning season.

The Heritage Bill has been widely criticised for its apparent disregard of our natural heritage. Unless you’ve been hiding under a particularly robust hedge for the past few months, readers interested in environmental matters will know that the Bill sought to weaken already toothless legislation around the cutting of hedgerows and burning of uplands by extending the permissible timeframe well into the breeding season for birds.

Bizarrely, this decision was taken without a baseline scientific understanding of the nesting patterns of some of our most threatened birds such as the curlew and hen harrier that breed in uplands in March, and yellowhammers that breed in hedgerows as late as August. That’s without mentioning the pollinators, butterflies and other mammals, birds and insects that these changes could affect.

From a bird’s perspective, a good hedge is one that is high enough to build your nest in without predators getting at the eggs from above or below, wide enough to scratch around for insects and grubs underneath, with a diversity of tree and shrub species to provide berries throughout the lean months and tall branches on which to perch, sing and fluff feathers in spring in order to attract a mate.

From a pollinator’s perspective, a good hedge will have flowers in early spring on which to feast after emerging from hibernation, another flush in late autumn to stock up on calories for a long winter sleep, and suitable banks, nooks and crevices in which to nest. Hedgerows also provide crucial habitats for many mammals, and are home to beautiful wild flowers such as dainty purple violets, lemon-coloured primrose and wild dog rose, to name but a tiny few.

Our hedgerows connect species that would otherwise be isolated, supporting genetic diversity

Our hedgerows, man-made though they are, are essentially ribbons of native woodland across the landscape. They connect species that would otherwise be isolated, supporting genetic diversity. They help rainwater to dissipate more quickly, protect soils and filter pollutants. They shelter livestock from harsh weather, including sweltering heat. They also connect us to our cultural roots: many of the species they harbour have fascinating backstories in Celtic mythology and folklore, and offer excellent foraging opportunities (hedgerow jam, anyone?).

The idea that we’re somehow in a zero-sum game between nature and productivity is out of date. More and more of us get this, and it’s not just environmentalists, either: farmers, beekeepers, schoolchildren, millennials, gardeners, ordinary folk with no special ecological expertise understand the value of nature. My work takes me into some of Ireland’s biggest corporations to talk about biodiversity, and the rapidly growing level of engagement over the past few years suggests that they are starting to get it too.

The changes ushered in by the Heritage Bill are sadly symptomatic of an attitude that continues to insist that an efficient approach is the best one, irrespective of its impact on nature. That it might be uneconomic to irreparably damage biodiversity in the pursuit of such efficiency seems lost on too many of our decision-makers. That this isn’t lost on a growing swathe of Irish people is cause – if not for relief – then for a little hope, at least.