Dr Tara Shine: ‘The scientific world is simply not designed for women’ 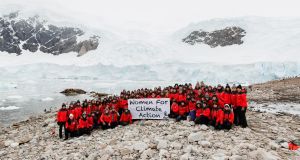 “The scientific world is simply not designed for women,” declares Dr Tara Shine. The environment and development consultant is travelling to Antarctica in January 2019 as part of a global leadership programme for women scientists called Homeward Bound, which has the evocative tag line “Mother Nature needs her daughters”.

Shine is the only Ireland-based scientist taking part in the project’s year-long programme. Clearly thrilled to be one of the 80 women selected from all over the world, she plans to use this opportunity to raise awareness of the need to promote and encourage women in science, technology, engineering and mathematics (Stem) in Ireland.

As special adviser to the Mary Robinson Foundation until the end of 2018, she will also use the experience to further highlight climate change, sustainable development and plastic pollution.

This year is the centenary of Irish women getting the vote, “ yet women are still very under-represented in science and technology”, Shine says. “There are lots of women at the lower levels of science, particularly in academia, but on the upper levels, the numbers of women are much less. The scientific world is simply not designed for women – and a lot of research funders don’t even pay maternity leave.”

Homeward Bound is the brainchild of Fabian Dattner, an Australian communications consultant who dreamed of sailing to Antarctica with a group of women. Dattner decided to make her dream a reality. She developed Homeward Bound to draw 1,000 women scientists together over 10 years.

The aim of each trip is to give the participants opportunities to share their knowledge and expertise, form international networks and research collaborations to address climate change, and increase the visibility of women scientists in academia and industry.

Shine, whose trip is funded by the Environmental Protection Agency and Repak, the industry-sponsored recycling association, sees it as an opportunity to learn more about the impact of climate change on the Antarctic.

She says, “All the environmental issues are brought into sharp relief in Antarctica. It’s the last wilderness continent. It’s warming faster. There is a huge plastic pollution yet it’s so far from where anything is made or consumed.” The Homeward Bound participants will visit research stations in the Antarctic to get the most recent data on the effects of melting ice.

Shine also wants to share her skills as a writer of climate-change policy and her international experience working with United Nations agencies. “I respect the power of international agreements and the value of the UN in making progress on global issues. Seeing the Least Developed Countries group” – 47 nations that are particularly vulnerable to climate change but have done the least to cause it – “grow in stature in the climate negotiations has shown how smaller countries can have a powerful voice,” she says. Women in developing countries are often the ones on the frontline of climate change, coping with the impact of flooding and drought on their farms.

People are overwhelmed by climate change and issues around sustainability. They are uninformed, misinformed, but many want to do the right thing

Shine believes it’s important for scientists to share their findings with wider audiences. “Many scientists are funded to do research which results in a scientific paper informing the scientific community. But it’s important to bring your findings to politicians and the general public. I know a lot about the UN convention on climate change and how it works procedurally and politically. If you don’t know these things, you won’t know how to influence policy. There is a need to upskill researchers in science communications.”

Having more high-ranking women scientists and mentors for young women scientists are key to moving on from the current gender imbalance in Stem. “The first female astrophysicist in Pakistan is on Homeward Bound. She is such a role model for women in Pakistan. I myself want to be a role model for women and girls and I want more women’s voices heard in meetings, on journal review panels and on boards of directors. We can support each other in lots of simple ways – by echoing what women say in meetings, by being generous with information, advice and ideas.”

As a cofounder of Plastic Free Kinsale (she lives and works in the Co Cork town), Shine says the conversation on sustainability must change from “Ugh, do I have to?” to “Where do I start?” She says, “People are overwhelmed by climate change and issues around sustainability. They are uninformed, misinformed, but many want to do the right thing. Information is often hidden in grey text on the internet. We want to make it visual and attractive and offer people easy solutions to do one at a time without doom or gloom and guilt.”

As a regular sea swimmer and scuba-diver, she says she’d like to do a “polar dip” in the Antarctic Ocean. “I’d also like to highlight the Teach a Girl to Swim initiative. There are many countries where it is culturally unacceptable for girls to swim yet swimming is so important.”

In a nutshell, what does she hope the Homeward Bound trip will mean to the 80 women scientists? “I hope we will all go back braver, more empowered and better equipped to find new opportunities and to promote and apply for new research projects with more courage than we had before.”

You then need to give women with children opportunities to manage their work-life balance to avail of promotional opportunities and be paid equally to men while having some flexibility in working hours.

Some statistics are revealing.

1 Women who do not have children tend to earn more than women who do, but both groups still earn less than men.

3 In the UK, women academics in science, engineering and mathematics have more administrative duties on average than men and so less time to do research.

4 Research suggests that women postdoctoral applicants have to be significantly more productive than a male applicant to receive the same peer review score. Even in engineering, where women publish in higher-impact journals, they receive fewer citations. Double-blind reviewing of publications – where authors are not identifiable to reviewers and vice versa – has increased publication rates for women first-author researchers.

5 Women cite feelings of isolation, an unsupportive work environment, extreme work schedules and unclear rules about advancement and success as major factors in their decision to leave. Family responsibilities such as caring for children or moving to follow a partner’s job are common reasons for exiting the science and engineering sector, according to several studies. Institutional support for family commitments is linked with job satisfaction and a sense of belonging.

Taken from Stronger Together, a series of gender factsheets compiled from research around the world by Homeward Bound