A lot to digest: are nanoplastics bad for human health?

Microplastics can break down into nanoplastics, which can permeate human cells 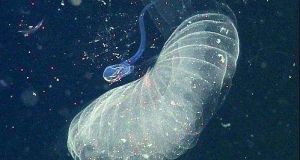 When we see pictures of beaches and seas choked with plastic, the impact of our throwaway culture sinks home. But the plastic we do not see is probably doing more harm, Irish scientist warn.

Tiny pieces are going on to farmland and flowing into rivers and lakes. These microplastics are ending up in earthworms, birds, fish and our drinking water. A major source is sludge, which is the solid stuff leftover after sewage treatment.

EU policy on recycling favours using sludge as fertiliser, and 80 per cent of Ireland’s is reused in agriculture, particularly in the southeast. An Irish study last year found about 4,000-15,000 microplastic pieces per kilogram of sludge from sewage plants. “This is probably an underestimate,” says Dr Anne Marie Mahon at the Galway-Mayo Institute of Technology, who led this research.

Some sewage works break it into ever smaller pieces. “Some treatments exacerbate the problems. Particles are broken up so you can’t see them, and they can be ingested by worms and eaten by birds,” says Mahon.

Mahon is leading a study which is surveying Irish river and lakes this summer, funded by the Environmental Protection Agency (EPA). She expects to find plastic bits in insect larvae in rivers, in freshwater fish and in otter droppings. Some of these probably came from clothes. A recent Swedish study found that polyester fleeces shed most fibres – 7,000 in one wash.

Fibres from your washing machine can flow to a sewage plant, into sludge and on to farmland. Sewage sludge must be spread 20m from lakes and rivers, but heavy rain will wash sludge and your fleece fibres into waterways, where they may be eaten by insect larvae, which in turn are eaten by fish. Low numbers of microplastics have been found in pike and perch from Lough Corrib, for instance.

One issue is that the building blocks of plastics can be hormone-altering chemicals, and plastics contain additives that we know little about in terms of implications for human health. Another risk is that heavy metals, pesticide and drug residues and nasty bacteria can cling to plastic particles. These could come from sewage, diesel tractor fumes or crop treatments. The particles concentrate the pollutants, allowing them to enter the food chain. Effects on human health – if any – are unknown.

A study last year for the Environmental Protection Agency that Mahon cowrote identified sludge spreading and the recycling industry, where plastics are washed, as significant sources of microplastics. It estimated that at least a billion microplastic particles are spread on Irish farmland each year (not all farms buy sludge).

Recently, Mahon began investigating construction sites. “That is a large source that hasn’t been defined properly,” she says. She’s optimistic though: “There could be some easy wins on construction sites by simple process improvements, like doing all your cuttings in one place with a tray underneath.” Otherwise, shavings will enter the soil. What happens after plastic enters soil is a mystery. International research suggests some accumulates in the soil, some gets blown away by wind, while other microplastic is washed into rivers.

The shape of the particles and the type of plastic complicates what happens to them in the environment, when they move overland or through soil. Engineer Dr John O’Sullivan at University College Dublin is trying to find out by studying six types of plastic in his lab. He has nine soil columns set up and plans also to simulate rainfall on soil to track plastic movement. “There’s high levels of uncertainty,” says O’Sullivan. “There is some evidence that soil can act as a reservoir.”

EU regulations limit metals in sludge added to soil, but not microplastic. Mahon questions whether we should be adding treated sludge at all, and predicts microplastics will be more strictly regulated in future. Meanwhile, Irish scientists are filling in knowledge gaps. “We need to look at pathways, risks and impact of microplastics,” says Mahon. “If we cannot assess the risks, it will be hard to develop policy.”

Ireland relies on surface freshwater for drinking supplies more than most European countries, so microplastic contamination matters here. The 2017 EPA report estimated that by downing 2 litres of tapwater a day, you will probably ingest three pieces of microplastic. For well water, it is 12 pieces.

Mahon is supervising a student in Trinity College Dublin who is looking at microplastics in Irish drinking water. “Everyone wants to know what they are drinking,” says Mahon, who would like to track microplastics at each step of our drinking water treatment process.