‘Quite simply, we have found support for the existence of internal bathroom scales’ 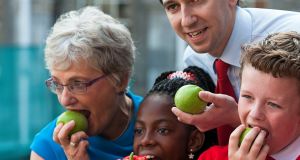 The Ministers for Health and Children respectively, Simon Harris, TD, and Katherine Zappone, TD, at the launch of ‘A Healthy Weight for Ireland - Obesity Policy and Action Plan 2016-2025’. Pictured with the ministers are Bisi Atelade (11), from St Audoen’s NS and Charlie McCormack (10) Talbot SNS. Photograph: Dave Meehan

The disease of obesity is now a scourge in the western world, including Ireland where 10 per cent of boys and 9 per cent of girls are obese compared to 1 per cent in 1976. Ireland ranks 79th out of 200 countries for prevalence of obesity. Obesity is very difficult to treat successfully and conventional interventions through dieting and lifestyle have not succeeded anywhere.

But, hopes of a successful treatment for obesity flicker at last. Some very clever research on mice and rats at the University of Gothenburg, Sweden, has found evidence for the existence of an internal bodyweight, and therefore fat mass, sensing system (an “internal bathroom scales”) that should lead to better understanding of the causes of obesity and, it is hoped, to new anti-obesity drugs. The work, authored by Prof John-Olov Jansson and others, was published in the journal PNAS, November 8th, 2017.

Epidemiological studies have shown that people who spend a lot of time sitting down are at increased risk of obesity, diabetes and cardiovascular disease. In other words, standing is protective against developing obesity, although the mechanism, until this present Swedish work, was unknown. The Swedish authors hypothesised that there is a second homoeostatic mechanism in addition to the leptin system (described later) that regulates body weight through impacting on the body’s fat mass.

This hypothesis was tested on diet-induced obese mice and rats made artificially heavier by loading them with extra weights, weighing 15 per cent of the animal’s body weight, implanted in the abdomen or under the skin. When these extra weights were added the mice body fat decreased and blood glucose levels improved. The mice actually lost the same amount of weight as was artificially added.

This result strongly suggests that something inside the body can detect the extra bulk and can reverse the body weight increase by reducing food intake. Jansson explains: “Quite simply, we have found support for the existence of internal bathroom scales. The weight of the body is registered in the lower extremities. If the body-weight tends to increase, a signal is sent to the brain to decrease food intake and keep the body weight constant.”

This internal bathroom scales mechanism seems to be mediated through a class of bone cells called osteocytes. It is already established that osteocytes can sense changes in bone strain. And, this study also showed that the body-weight reducing effects of increased loading were lost in mice that were depleted of osteocytes. Increased body weight seems to activate a sensor that is dependent on osteocytes in the weight-bearing long bones of the lower extremities.

Until this present work the only known homeostatic regulator of body fat mass was the leptin system, discovered in 1994. Leptin is a hormone secreted by fat cells. Leptin concentration increases when fat cell numbers increase and the leptin travels to the hypothalamus to signal the brain to eat less. However, despite leptin’s involvement in body-weight regulation and despite years of research, leptin didn’t lead to any new obesity treatment. It seems that leptin must work in co-operation with other mechanisms to regulate body weight.

This new “bathroom scales” is the first new body fat regulatory system to be discovered since the discovery of leptin 24 years ago, and it seems to work independently of the leptin system. Of course it has so far been demonstrated to exist only in rodents and has yet to be shown to work in humans. However it would be quite amazing if this mechanism does not also operate in humans.

The hope now is that activation of this newly discovered internal body scales in combination with the leptin system can become an effective treatment for obesity. One simple interpretation that would explain the connection between sitting and obesity is that too much sitting causes the internal body scales to give inaccurately low body weight information to the brain, stimulating us to eat more and to gain weight. There is a simple solution to this problem. Most of us spend our working lives sitting behind desks. We should regularly stand up (say every 20 mins) and walk about a little, and then go for a decent walk at lunchtime.