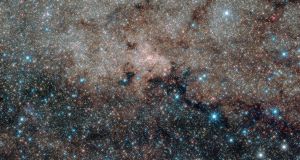 A Nasa image of the centre of the Milky Way. Photograph: AFP/Getty Images

A new study points to evidence of thousands of black holes at the centre of our galaxy, the Milky Way.

The idea that a plethora of smaller black holes may surround the “supermassive” hole at the heart of the Milky Way dates back decades. But it has remained an unproven theory because the holes are so difficult to detect.

Now scientists have developed a technique to reveal the smoking gun for hidden black holes at the galaxy’s centre.

They searched for X-rays emitted by a subgroup of low-mass black holes that have captured a passing star in their gravitational grip, creating a “black hole binary”.

The hunt came up with evidence of 300 to 500 such binaries, from which it was possible to infer how many “isolated” black holes there must be at the galactic core. The answer was about 10,000.

US astrophysicist Dr Chuck Hailey, from Columbia University in New York City, said: “This finding confirms a major theory and the implications are many.

“It is going to significantly advance gravitational wave research because knowing the number of black holes in the centre of a typical galaxy can help in better predicting how many gravitational wave events may be associated with them.

“All the information astrophysicists need is at the centre of the galaxy.”

The supermassive black hole at the heart of the Milky Way, known as Sagittarius A (Sgr A), contains about 4 million times the mass of the sun and is 26,000 light years from Earth.

The halo of gas and dust around Sgr A is thought to provide the perfect breeding ground for massive stars which collapse into black holes when they die. These black holes, and others from outside the halo, are pulled towards Sgr A and held captive around it, scientists believe.

However, detecting them is a major challenge. “Isolated, unmated black holes are just black — they don’t do anything,” said Dr Hailey. “So looking for isolated black holes is not a smart way to find them.”

Instead, his team scoured through archived data from the Chandra X-ray space telescope to identify the X-ray signatures of black hole binaries.

The findings are reported in the latest issue of Nature journal.