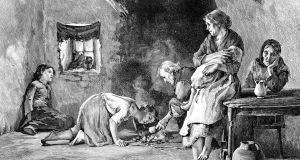 Interior of a peasant family’s hut during the Great Famine, 1845-1849. Illustration from The Life and Times of Queen Victoria, by Robert Wilson. Photograph: The Print Collector/Getty Images

‘Are not all manly appeals lost upon on a scoundrel who lives with his pig, like his pig; and every but the way he should live – ON his pig.”

So wrote a contributor to the Nation in 1846, one year into the devastating Great Famine. By 1846, many of the Irish poor had sold or eaten their pigs and were no longer living with them.

As conditions deteriorated in many subsistence farming areas, observers continued to suggest that the poor lived like animals though the reference animal was not always a pig. The fact that people and pigs both depended upon potatoes as a staple food had tied their fates together in ways that suggested to some that the Irish were not fully human.

This is food month in The Irish Times and so I thought it would be worth thinking about the cultural meaning we attach to what we eat. We are inundated with ideas about what is “good” to eat.

Nutritional science was in its infancy, but many chemists suggested the Irish potato diet was nutritionally unsound

Researchers and policymakers, chefs and newspaper columnists still pour out analysis of the Irish diet at a rate that I think might have even impressed 19th-century reformers. The Great Famine led to much soul searching about the Irish diet.

Nutritional science was in its infancy, but many chemists suggested the Irish potato diet was nutritionally unsound, as though to suggest the poor were at least part to blame for the catastrophe. Much was made of the idea that cultivating potatoes was an inferior form of agriculture rather than an effective way of coping with high rents and incredibly small parcels of land.

One chemist, John Aldridge, went so far as to claim that potatoes were less nutritious than hay with the obvious implication that the Irish poor were worse off than domestic beasts.

Aldridge, like many scientific men of his time, thought that meat was a necessary component of the diet of a civilised human

Famine relief often took the form of providing free soup. This was done by landlords and religious groups initially and then by the government, beginning in 1847 (recognised as the worst year of the famine). Chemists were not happy with many of these soups either, dominated as they were by vegetable castoffs and boiled grains. Feeding people a vegetarian soup, Aldridge claimed, was akin to feeding them “in the same manner as cows and sheep”. As a result “manifestations of industrial exertion could not be expected”.

Aldridge, like many scientific men of his time, thought that meat was a necessary component of the diet of a civilised human. He only endorsed soups made with a meaty broth as sufficiently nutritious. Other commentators argued for an entire overhaul of the Irish agricultural system in order to supply the populace with more meat and more bread, markers of civilisation – unlike the potato.

There were interesting dissenting voices as well. James Haughton, an abolitionist and sometime activist for repeal of the Union, proposed a vegetarian diet as a solution to Ireland’s problems. His reasoning might impress conservationists today:

Haughton believed that reducing dependence upon cattle grazing would create more jobs in a diversified agriculture and produce healthier humans. Contemporaries were less impressed and dubbed him “Vegetable Haughton” because of his efforts to support a vegetarian society in Britain and Ireland.

Reformers of 19th-century Ireland rejected the idea of a vegetarian diet not just because it didn’t appeal to their palates. Many writers suggested that living “on” a pig or other animals was the only way to be properly human. And living on pigs and cattle meant eating them. Eating animals proved that humans were at the top of the pecking order of life on Earth.

In 21st-century Ireland we’re still interested in what food can say about who we are and who we want to be. A move away from living on animals and towards living with them (in a metaphorical sense at least) is probably crucial to our future on the planet.

Dr Juliana Adelman is assistant professor of history at DCU. Her new book, Civilised by Beasts: Animals and Urban Change in Nineteenth-Century Dublin, published by Manchester University Press, looks at the link between human and animal in making the capital city. Readers can get 50 per cent off with the code BEASTS50 here