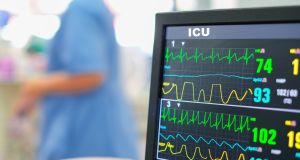 Cardiovascular diseases account for 36% of deaths in Ireland. High blood pressure is experienced by one in four Irish men. All told around 10,000 people in Ireland die from heart disease every year

The pandemic has prompted many people in Ireland to postpone out-patient cardiovascular appointments, but studies are emerging that show SARS-CoV-2 may have massive consequences on the coronary system itself.

While the virus’s impact on the respiratory system was expected and has since been well documented, it is now emerging that other major organs are at significant risk of related potentially long-term damage too.

A study by researchers in Germany, Italy and Moscow of 100 Covid-19 patients in Frankfurt published in July found 78 suffered cardiovascular damage of one form or another linked to contracting and recovering from Covid.

Sixty of those patients were found to have myocardial inflammation which can curtail the heart’s ability to pump and can cause irregular heart beating.

Published in the peer-reviewed journal JAMA Cardiology and viewed almost a quarter of a million times online, the research has been cited by some experts as the most important cardiology paper “of the decade” .

In an editorial accompanying its release, JAMA Cardiology editors added that “if this high rate of risk is confirmed, the pathologic basis for progressive left ventricular dysfunction is validated, and especially if longitudinal assessment reveals new-onset heart failure in the recovery phase” the virus could morph “to a new de novo incidence of heart failure and other chronic cardiovascular complications” .

The study was initially criticised for errors in statistical tests and data, but a reanalysis by the authors reported no significant changes to the overall outcome.

The study has been quoted in discussions that have resulted in cancelling or postponing major sporting events across the world, such as several multibillion dollar college football conferences in the US.

This has set off a race among scientists and the global cardiology community to understand and address the emerging damage Covid-19 can wield on the human coronary system.

While a universal medical consensus on the direct effects Covid-19 has on the heart is by no means yet at hand, the knock-on stress-related damage it causes on the body’s organs are not in question.

A report published in Knowable Magazine in August averred that “the virus can blunt the function of ACE2 receptors, which normally help protect heart cells and degrade angiotensin II, a hormone that increases blood pressure”.

It adds that as the body reacts to fight the virus it releases adrenaline and other hormones that can adversely affect the heart.

Heart disease is the world’s leading cause of death, and Ireland is no exception.

“We know that patients with high blood pressure, obesity and heart disease are at increased risk of developing a severe Covid-19 illness in the case of infection with the virus. All three of these conditions have a high prevalence in Ireland compared with other countries,” says Prof Robert Byrne, director of cardiology at the Mater Private Hospital.

Cardiovascular diseases account for 36 per cent of deaths in Ireland. High blood pressure is experienced by one in four Irish men. All told, around 10,000 people in Ireland die from heart disease every year.

“In the case of high blood pressure, which seems to be particularly associated with increased risk if you develop Covid-19, a recent study published in the Lancet showed that Ireland had one of the highest prevalences of high blood pressure among the [12 high-income] countries studied,” adds Byrne. “To compound matters it also has the lowest levels of awareness of the problem, appropriate treatment and adequate control.”

While the US government has thrown billions of dollars down the throats of Big Pharma in search of a safe and successful Covid-19 vaccine, work is also under way to uncover its effects on the coronary system.

The Cleveland Clinic in Ohio is heading up an initiative called Covid-19 and its Cardiovascular Impact Rapid Response Grant, one of the biggest efforts of its kind under way.

It and 11 other medical agencies at Columbia, Johns Hopkins, Stanford and Harvard universities and others are currently working towards “actionable outcomes” on how to protect the heart from Covid-related damage.

“We do have a list of the projects, which span from basic to clinical. We are getting a website up soon that will have this information. Hopefully (we) will get an update in a couple of weeks,” says lead researcher Mina K Chung of the Cleveland Clinic.

She says we should expect to see some results from the research at the AHA virtual Scientific Sessions to be held on November 13th to 17th.

Similar efforts are under way in Ireland. Currently in set-up phase, the SETANTA Study (Study of Heart Disease and Immunity After Covid-19 in Ireland) will enrol patients who recover from the virus beginning later this year.

The study, whose findings are expected in 2021, will be co-ordinated from the Mater Private’s Cardiovascular Research Institute Dublin (CVRI), together with the Royal College of Surgeons in Ireland (RCSI) and investigators from Beaumont Hospital and University College Dublin, and potentially the HSE.

“(It) will investigate the rate of subclinical heart disease and assess its relationship to immunity determined by serology,” Byrne says.

Experts in pulmonary rehabilitation at the Hp2 Lab at the Grenoble Alps University in France suggest that for survivors of the virus, physical exercises such as walking are essential to regaining muscle tissue – including those in the coronary system – lost due to being horizontal for a long period. Unlike organs such as the lungs and skin, once the heart suffers significant damage it has little ability to repair itself.

Echoing many specialists, professor of cardiovascular medicine at Trinity College and RCSI professor emeritus of preventive cardiology Ian Graham believes it is too early to draw ironclad conclusions on how the virus directly affects the coronary system.

“Many viral illnesses can affect the heart if you look hard enough but the effects are usually transient. The European Society of Cardiology has noted that proven severe myocarditis of clinical significance seems rare in Covid infections.”

All the while the virus is also known to adversely affect the kidneys and brain, meaning the demands of the scientific and medical research communities and governments alike are likely to be spread thin in the coming months and years.

And while physically distanced outdoor activities have taken centre-stage as a recreational activity this year, it’s not a one-way street. For the thousands of people who commuted to work on a bike, working from home has now eliminated that avenue for regular exercise.

Experts say around three times as many people in Ireland have died from heart disease than from Covid-19, and medical professionals say some patients are reporting reduced physical activity due to restrictions on movement.

Still, there’s much the general population can do. Graham suggests at-risk individuals may be able to take steps to protect themselves.

“Report worsening breathlessness promptly, especially if associated with leg swelling or a sudden increase in weight (which may be a sign of fluid retention). For healthy persons, however, regular exercise is more important than ever at a time when many are working from home.”