Clicks, beeps and hisses: the music of the 1969 moon landing 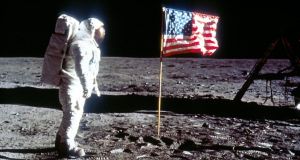 Astronaut Edwin “Buzz” Aldrin on the moon on July 20th, 1969, during the Apollo 11 mission. Photograph: Nasa/Liaison

There are constant clicks and beeps, a steady background hiss of static both from the fact that the signal had to travel nearly 400,000km there and 400,000km back again, but also because 1969 recording technology wasn’t exactly high fidelity.

There are voices strange and yet familiar. Accents from all over the United States, often tumbling over and cutting across one another. Those who were there at the time say that learning to listen to the tumult of conversation coming into their headsets, and picking out the bits that you needed, was one of the hardest skills of all.

I have a CD (I know – how quaint!) of these recordings, transferred from reel-to-reel tapes made 50 years ago, July 20th, 1969, to be exact, of human beings talking to each other across the gulf of space. The recordings and the transcripts of the Apollo 11 moon landing are historical fact; they are something that we know and have lived with for all of our lives. All of our lives plus seven years in my case. Yet, even today, listening back to the 13 minutes that it takes the lunar module named Eagle to descend from orbit to that first landing on the moon takes my breath away.

To listen to it now is to enter into a world of professional jargon and impenetrable test-pilot speak. Everything has an acronym or a nickname, from the easily explicable (Guido is a a shortened form of guidance officer, the person at mission control who decides if the spacecraft is on the right course) to the downright Byzantine (once the acronyms have run out, the astronauts and controllers resort to reading out four-figure computer codes that mean something to someone, somewhere).

Right from the get go, things are going wrong. All those hundreds of thousands of kilometres away, Eagle is speeding down to the moon at 30m per second and the first data that mission control in Houston notices is that it’s going too fast and is probably going to overshoot its original intended landing area. The problem is communicated in the terse, short sentences that characterise the recordings. There is no time to waffle or prevaricate.

That’s reflected in the famed go-no-go call. You hear the gravelly voice of former marine (although he would say that there are no former marines, only marines) Gene Kranz, the flight director. Known simply as Flight, Kranz – a no-nonsense former fighter pilot – is the most powerful man in the United States for those 13 minutes. Even the president could not have called him up and overruled a decision, and he turns to his room full of experts for their call on whether it’s safe to continue with the descent.

It’s a scene much replayed in films and on television, but the sheer immediacy of it hits me every time. When you see it on screen, the actors playing the men of mission control are given time to call out their “go” responses, one by one. In reality, it’s another tumult of voices, with “go” calls answering Kranz almost faster than he can call out the individual job titles. Retro, Fido, Guidance, Control, TELMU, GNC, EECOM, and surgeon all yell their commands to go. Steve Bales, the guidance officer, is especially strident in his go call. He will be of particular importance in a moment.

There are more problems. Eagle’s main antenna is having glitches, and mission control keeps losing both data and voice links – potentially a problem that could cause the mission to be aborted, now at about 30,000ft above the surface of the moon, the cruising height of a commercial airliner. The problem is resolved by using the still-orbiting command module as a relay station for the signal.

Then it happens: “1202.” A voice from the spacecraft, that of Neil Armstrong, has called out that the onboard computer, vital for guiding and flying the Eagle, is malfunctioning. A split second of silence takes over the radio link, and even now I can feel my chest tighten and my throat close up a little. Fifty years on, even knowing that the mission was a success, and Armstrong and co-pilot Buzz Aldrin survived, it’s a moment of panic, of terror, of maybe losing both the men and the mission.

Seconds later, it’s the strident voice of Bales again. Barely out of college (the average age of the mission control team was just 27), Bales has worked out that the computer is simply getting too much information and is overloading. He’s confident that as the spacecraft gets lower and the landing radar takes over, all will be well. He has made that life-or-death decision in a fraction of the time it takes you or I to decide on a pizza, and shouts “go on that 1202!” into the radio.

The descent continues, the garbled acronyms and computer codes continue to flow and all seems well, even if the tension continues to rack up. And then it happens. Bob Carlton, in that soft, imperturbable Caroline drawl, calls “60 seconds”. Sitting at the control console, Carlton is noting Eagle’s fuel reserves. Because of the earlier overshoot, Armstrong can’t land on the expected location and is now having to manually fly Eagle to look for somewhere smooth to set down. In doing so, he’s eating into the spacecraft’s fuel reserves, and Carlton’s call means he has a minute to either land or twist the “abort” handle. Go beyond the 60 seconds, and Eagle won’t have enough fuel to climb back up again to return from the moon.

Now the only voices you hear are those of Aldrin – calling out the descent figures while Armstrong flies – and Charlie Duke. Duke himself would walk on the moon in 1972, as part of Apollo 16, but his high-pitched voice is probably more famous than his achievements. As “CapCom”, the only person other than the flight director allowed to talk directly to the astronauts, he’s the one who has to tell them whether or not they’ve got enough fuel left. And he’s got more bad news for them, because Carlton has just called “30 seconds”.

Just nine second later, Armstrong calls “contact light”, indicating that a probe on one of Eagle’s three legs has brushed the surface of the Moon. Nine seconds, but even listening now it feels like an eternity. Can they do it? Will they do it? I know they did it, but maybe this time they won’t?

And then, those famous words. “Houston, Tranquillity Base here. The Eagle has landed.” Duke’s response is almost as famous. “Roger, Twan... [he has to correct himself] Tranquillity. We copy you on the ground. You got a bunch of guys about to turn blue. We’re breathing again. Thanks a lot.”

Fifty years on, I too start breathing again. I still hold my own breath, every time.

You can make all the arguments you like – that it was all about Cold War politics, that Nasa was a military organisation disguised as a civilian one, that the science we learned from going to the moon was pretty useless. None of that matters.

As command module pilot Michael Collins relates of the world tour that the three Apollo 11 astronauts undertook after the landing, no one said “Oh, you Americans have done it”, they all said “We have done it, we have landed on the moon.” Not quite a quarter century from the end of the second World War, only eight years since John F Kennedy said that we should do it not because it was easy but because it was hard, we – humans, humanity, the people of Earth – really had done it. We had stepped, however briefly, onto the surface of another world, an act filled with profundity if nothing else.

That’s why, to me, those clicks and hisses, the random beeps, the terse words, the acronyms, the drawls – those recordings are as important as anything handed down by Handel or Mozart, Glenn Miller or Ella Fitzgerald. They are the music of the moon.