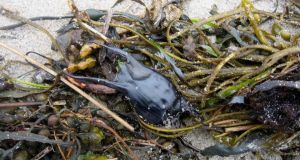 A Spotted Ray (Raja montagui) eggcase sighted on Carratigue Beach in Co Mayo. This is one of Ireland’s more common species of egg-laying skate

There’s a buzz around citizen science at the moment with growing numbers of people keen to report on the presence or absence of everything from fish to flowers to frogs. And, the arrival of smartphone apps has empowered individuals to report directly from their sighting location.

But, behind this buzz of activity, data collectors – which are often environmental non-governmental organisations – can face challenges. In their mission to understand natural phenomena better, voluntary groups are sometimes stymied by lack of stable funding and resources.

The Irish Whale and Dolphin Group hosted a cetacean identification and recording workshop recently in the National Biodiversity Data Centre in Waterford. It’s aim (and another one in Kilrush, Co Clare in July 2018 – see iwdg.ie) is to build numbers of well equipped citizen science recorders.

“We’re not training as many people as we used to but we need citizen scientists because 90 per cent of our records are collected through citizen scientists. For instance, I can tell you where it’s best in Ireland to see humpback whales because of our citizen scientist observation schemes,” explains Simon Berrow, chief science officer of the Irish Whale and Dolphin Group (IWDG).

Berrow says that not only is it important to train people in field and identification skills but also to feed back information to these citizen scientists. “We had the best records in Europe but our website got hacked five years ago and although we’ve built a new website, we’ve a technical issue with mapping the sightings at the moment.” Approximately 1,500 sightings were recorded in 2017 of which the main species were porpoises and common and bottlenose dolphins.

Securing ongoing funding for these citizen scientist initiatives can be a problem. “We are currently not getting any funding for our sightings scheme but the National Parks and Wildlife give us €10,000 a year for the data collected from our strandings scheme,” Berrow explains.

The IWDG has noticed a significant increase in strandings since 2011; particularly of common dolphins in the winter months. Since June, 2017, the IWDG have worked with veterinary laboratories to work out the cause of death. Reports are then submitted to the Irish Marine Institute for their records.

The IWDG also release their data to Master’s and PhD students keen to study the implications of changing numbers of cetaceans in Irish waters. “I think schemes like ours provide a cheap and efficient way to monitor populations and threats but the Government doesn’t seem to commit to long-term funding,” Berrow says.

Dr Sarah Varian is a marine biologist who runs the citizen science project, Purse Search Ireland. “We called it a public participation project when we first started in 2007 but the term citizen science has grown hugely since then and people can now use their mobile phones to upload photos and beach locations of sightings onto mermaidspurseireland.ie .” Mermaid’s purses is the popular name for the eggcases of sharks, skates and ray which are commonly washed up on Irish beaches.

Varian says many schools are now including eggcase hunts in their annual nature programmes. “Over 12,500 eggcases from 13 species of shark, skate and ray have been reported by citizen scientists to date. This includes several threatened species, including the critically-endangered White Skate, Flapper Skate, Blue Skate (Common Skates) and the endangered Undulate Ray, ” Dr Varian adds.

“One quarter of sharks and rays are threatened with extinction, according to the World Conservation Union so it’s important to monitor them,” she notes. The egg cases that citizen scientists discover give valuable information about nearby nurseries for these elasmobranchii species.

“Sharks, rays and skates are particularly vulnerable to habitat degradation and over fishing because they develop late and produce very few offspring,” explains Dr Varian. Citizen scientists contributing to the Purse Search Ireland project have already highlighted nurseries along the West coast and particularly in Tralee and Galway Bay.

“Sharks, rays and skates are top level predators and they have an important role in the ecosystem. Their [depletion] would have a trophic cascading effect, which is to say an indirect effect on the whole ecosystem.” While funding is available for data collection, it’s more difficult to secure funding to write up scientific reports on the data, she says.

The Environmental Protection Agency has recently committed to working with citizen scientists both as part of the EPA’s own data collecting and in partnership with environmental organisations. “Citizen science is a strategic objective for the EPA and we finalised a three-year programme of work from 2018 to 2020 which will focus on the development of projects on clean air, clean water and sustainable behaviour,” explains Stephanie Long, EPA senior scientist. The EPA does an annual call out for new research projects related to climate, water and sustainability in June.

“As a research tool, citizen science has huge potential to collect so much data in a large geographical area,” she adds. The EPA will announce a new partnership project on water with citizen science input later in 2018.

Coastwatch Europe is an international network of environmental groups, universities and other educational institutions, who work with local people around the coast of Europe. Coastwatch organise an annual survey of the marine debris identified on the Irish coastline. About 2,000 volunteers collect and send information of what they find on their local stretch of coastline. This information is gathered together to form a national picture which is published at the end of each year.

The Environmental Education Unit of An Taisce organises a clean coasts campaign which includes two-minute beach cleans throughout the year, a clean coasts week in June and “big beach clean-ups” the third weekend in September. The programme is linked to international coastal cleanup events run by the International Ocean Conservancy – see cleancoasts.orgThe Irish Whale and Dolphin Group rely on citizen scientists records for their sightings and stranding schemes for porpoises, dolphins and whales – Iwdg.ie

Purse Search Ireland: Citizen scientists contribute almost all the data on “mermaid’s purses” commonly washed up on Irish beaches. These eggcases of sharks, skates and ray give valuable information on the nearby nurseries for these elasmobranchii species – Marinedimensions.ie