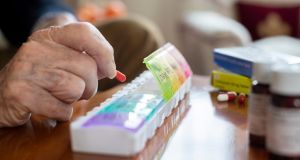 Functional technologies, such as calendar and medication reminders, can be of use to people in earlier stages of dementia who are living at home. Photograph: iStock

How will social robots complement the provision of care for people with dementia in the future? That was the key question at an online workshop hosted by the Alzheimer Society of Ireland on Wednesday.

Like many western countries, Ireland is already experiencing a skills shortage within the care sector. This gap is mostly being filled by carers from overseas, but this solution is “unsustainable” as the population continues to age, according to Dr Perry Share, head of business and social science at IT Sligo.

“For demographic reasons, but also due to competing jobs, there is a real crisis in trying to get people into care jobs,” he said. There are about 64,000 people with dementia in Ireland, but that number is expected to more than double in the next 25 years.

Social robots will not take the place of care workers but will complement their work and potentially address this skills shortage, said Dr Share, who is joint coordinator of an EU-wide project known as PRoSPEro (the Pedagogy of Robotics in the Social Professions in Europe). The Erasmus+ funded project devises ways to teach care professionals about the uses of social robots.

The Alzheimer Society of Ireland is currently using the most widely researched care robots on the market. A furry robotic seal named “Paro”, which is being trailed at the Orchard Day Care Centre in Dublin, responds to petting, conversation, and touch, said Fergus Timmons, head of external learning and development at the Alzheimer Society.

“A big thing in dementia care is pet therapy, where a real animal is brought into a dementia setting to give comfort to residents. The robot takes the physical danger out of that therapy,” he said.

The sensation of touch and getting a dementia patient to care for the pet robot can also provide them with a sense of purpose and autonomy, Mr Timmons said.

“It can be very therapeutic for people and that is comforting because sometimes we would need medication to achieve that same effect,” he added.

Nordic countries are leading the way in Europe in introducing their populations to these robotic technologies, according to Wei Qi Koh, a PhD student at NUI Galway exploring the use of technology for older adults with dementia.

About 80 per cent of Danish nursing homes now have a “Paro”. However, in many cases the tool is not used to its full potential and remains in a cupboard, Ms Wei said, adding that there is much research to be done to develop technologies to suit a range of complex needs.

While robots such as Paro can provide comfort and stimulation in institutional settings, more functional technologies can be of use to people in earlier stages of dementia who are living at home, Ms Wei said. Calendar and medication reminders, key locators, and safety prompts can provide a sense of autonomy for people with milder forms of dementia, she explained.

“These are not just intended to support care institutions but can support people to live at home for longer,” she added.

Dr Heike Schmidt-Felzmann, a lecturer at NUI Galway in bioethics with a particular focus on the ethics of robotics, said it was important to recognise the varying cultural responses to robotic technologies. Germans appear to have particular concerns around how robots could impact upon a person’s privacy, while the Spanish discussion is centred around fears of a system taking authority over people.

In Ireland, conversations are at an early stage, she said: “We are hoping to help people see this as a tool rather than a sci-fi threat.”

While the technology currently exists in a “medical grey area”, Dr Share imagines a future where consultants prescribe social robots to suit an individual’s needs. Those reluctant to embrace robotic technology within the care sector are fighting a losing battle, he added, as large technology companies are pumping huge money into development.

“We are on day one of a long journey, but this is going to happen whether we like it or not,” he said.