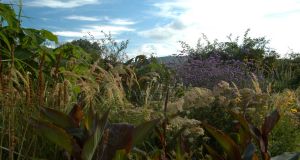 When you run your hands through the grasses in a meadow you can feel, see and smell the different species. Sweet vernal grass (Anthoxanthum odoratum) is one of our commonest species and it smells of dry hay and vanilla; remembering that smell can transport you back to childhood summer meadows, feeding horses or jumping from hay bales.

Grasses are most easily identified by differences between their tight or fluffy spikes of tiny pale flowers but if you know the tricks you can also learn to identify them from their leaves. The grass called Yorkshire fog (Holcus lanatus) has a distinctive soft velvety texture which comes from thousands of closely nestled hairs on its leaves.

The morning dew clings to these hairs turning it silver in the sunshine. Downy oat grass (Helictotrichon pubescens) has glossy green blunt tipped leaves with longer, sparser hairs than Yorkshire fog and loose tassels of oat-like flowers. Quaking grass (Briza media) flowers are like tiny baubles loosely attached to the plant by hair-thin stems, they shiver and flutter prettily in the slightest summer breeze.

You could be forgiven for thinking that there is just one kind of grass, given the subtle (but fascinating) differences between the 200 to 300 species in Ireland and the dominance of one particular species. Perennial rye grass (Lolium perenne) is native to Ireland but is widely planted in lawns, pastures and parks. It is an early growing, productive and robust grass species, thrives in highly fertile conditions and cows chomp it enthusiastically.

The intensification of pastures through the application of fertilisers at high rates to maximise production and support high levels of livestock has led to perennial rye grass monocultures through much of the countryside. While monocultures are optimised for performing well under a particular set of conditions they can struggle to produce well in conditions that are outside the norm.

So how do we science our way out of the risks of perennial rye grass monoculture in a changing climate? Grasslands contain more than just grasses, with legumes (plants from the pea and bean family) and flowering herbs being important grassland components. Legumes, like clovers, have the super-power of being able to fix their own nitrogen through a symbiotic partnership with nitrogen-fixing bacteria in their roots.

This means grasslands with a mix of grasses and clovers may not need additional nitrogen in order to produce good yields, saving money for the farmer and saving a significant amount of greenhouse gases which are emitted through the production, transport and use of fertilisers.

In multi-species grasslands research has shown that production can be maintained despite variable weather conditions from year to year as the subtle differences between the grasses, legumes and herbs in a meadow mean that different species can take advantage of different conditions. A bad year for one species is a good year for another. Summer drought and winter waterlogging are predicted to increase in Ireland with climate change, so putting all our cows in one perennial rye grass basket may not cut it in the future.

Dr John Finn from Teagasc recently presented his work at theIrish Ecological Association conference on the benefits of multi-species mixtures, showing how theevidence base for increased production from multi-species grasslands has progressed from basic ecology to agricultural relevance.

Increasing the diversity of Irish pastures has the potential to help farmers cope with the changing climate and the need to lower greenhouse gas emissions and also benefit the insects, soil invertebrates, bees, bats and birds that depend on diverse and functional grasslands for food and shelter.

Ireland’s 40 shades of green are made of a subtly-woven blanket of different grassland species that each have their own beauty and utility, but which are considerably stronger together.