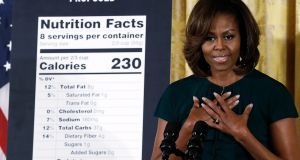 As US first lady, Michelle Obama advocated for modernisation of the nutrition label. Under President Donald Trump, the FDA rolled back the new regulation. Photograph: Win McNamee/Getty Images

It’s January and I suspect most of you have spent some time thinking about a c word. No, I don’t mean Covid. I mean “calorie”. Despite the efforts of YouTube fitness workouts and a national enthusiasm for walking and running, many of us have found working from home has reduced our incidental movement and increased our snacking.

Diet apps are bombarding my social media and possibly yours, too. Most of these won’t talk about calories, though. Or at least not directly. The 21st century saw the rise of diets that claimed to ignore the calorie in favour of lists of “bad” or “forbidden” foods. Even the venerable Weight Watchers moved to a points system that considers a balance of factors rather than simply calorie content.

Yet those of us who think about our weight are still very aware of the difference in calorie content of different foods. We rarely question where this system of food measurement came from and how it became so pervasive.

The calorie, you may recall from chemistry, was not initially related to food. It was a measure of heat energy. The translation of the calorie into a measure related to food and diet did not happen until the end of the 19th century. And before the calorie seemed a bit bad it was perceived as very, very good.

Historian Nick Cullather has documented the emergence of the food calorie through experiments by Wilbur Atwater in a basement laboratory at Wesleyan University in Connecticut. There Atwater sealed men into a chamber (a calorimeter) where he measured their output of work after the consumption of different foods.

Atwater’s experiments reflect ideas at the time that informed much public policy. First, Atwater assumed that the measure of a man was his ability to perform work.

Second, Atwater believed that the quantification and standardisation of foods as fuel would drive efficiencies from army rationing to prison management. Every Fitbit and activity tracker in the world relies on this very conversion when it presents you with your steps taken and calories burned.

For those who embraced the calorie in the early 20th century the only measure of a food was how much energy it provided. Food was potential work and one set of calories could be exchanged for another to find the most efficient way to supply the need.

Doctors initially viewed this reductionist view of nutrition with some scepticism. But rationing and food shortages during the first World War really brought the calorie into its own. Wheat’s value was not only its long-standing role as a staple component of the western diet but also as a calorie-dense food that was easily stored and transported. Wheat was rationed for civilians because it was an ideal method of delivering the needed calories to the army.

In Ireland, as in other European countries, the calorie became one way of seeing how to manage sufficient food in straightened times. For example, in 1917 The Irish Times published a table of food values in “Mollly Bawn’s Column”. The aim was to show how to make up the required 2,500-3,000 calories despite rationing of high-calorie items such as four, sugar and meat. Molly suggested a list of foods where milk, butter and cheese filled most of the calorie gap.

A scientific obsession with the calorie fed into ideas about food relief and development, as Cullather shows. International diets were criticised for their insufficiency in calories and, after the discovery of vitamins, for their lack of vital nutrients. Food aid was seen as a way of furthering American foreign policy and preventing the instability that hunger might encourage. Wheat, abundant in the United States and full of calories, became the most common form of famine relief.

Survivors of times of scarcity, if they thought about calories, thought about finding more of them. Calories were to be gathered rather than cut. Wasted food was not just wasted money but also wasted life and work in the form of unused calories.

I think the best lesson from the history of the calorie is contained in this advice from The Irish Times in 1937. If someone tries to stop you from drinking whiskey, you should explain that “there are approximately 350 life-giving calories in a small one”. Replace the whiskey with any food or drink, just remember that the calories are “life giving”.