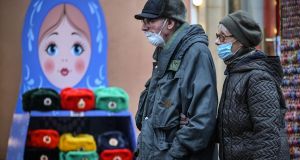 Some Moscow residents will be able to receive inoculation against coronavirus at 70 vaccination centres around the city from Saturday, with medical workers and teachers being the first in line to receive Russia’s Sputnik V vaccine.

The capital’s mayor, Sergei Sobyanin, announced that online registration for the vaccine would start on Friday, two days after Russian president Vladimir Putin said 2 million doses of Sputnik V would soon be available and “large-scale” vaccination should begin by the end of next week.

The Moscow-based developers of Sputnik V say it is 95 per cent effective, and each of the required two doses of the vaccine will cost less than $10 (€8.22) on the international market, while being offered free in Russia. They have also brushed off concerns raised by some experts about how quickly the vaccine was registered, and about the relatively small sample size in trials and the transparency of trial data.

“So, in agreement with the Russian government...we are opening online vaccination registration for educational staff, health workers in all sectors and also employees of city social services starting on December 4th,” he added.

“In the coming weeks, as large quantities of the vaccine are delivered, this list will be expanded. Vaccination centres will start work on December 5th.”

Officials in Russia - which has reported 2.4 million coronavirus cases, the fourth highest total in the world - say 100,000 people in “high-risk groups” and 400,000 military personnel have already been vaccinated with Sputnik V.

Russia hopes that as well as taming Covid-19 at home, Sputnik V will be widely used abroad. Its developers argue that its efficacy, cost and relatively simple transportation and storage requirements make it an attractive option.

Kazakhstan announced on Friday that it plans to start producing Sputnik V later this month, and Serbian president Aleksandar Vucic said his country had received a batch of 20 doses for evaluation.

“Our task is to provide vaccines; let people decide which they want,” said Mr Vucic, while insisting that his country’s choice of vaccines would not be swayed by politics, as Serbia tries to balance its foreign relations between the West, Russia and China.

“It does not interest me at all - I respect Brussels, but I love Serbia more, and most of all I love the people living in Serbia. If we manage to save even one more life, I’ll be able to take any criticism from Brussels...Washington, Moscow or Beijing. ”

The only EU member to import and test Sputnik V is Hungary, which maintains good ties with Moscow. Brussels has warned Budapest that a decision to use a vaccine that is not approved by the European Medicines Agency could undermine public trust in the mass vaccination process.