Internal structure found within ancient Egyptian wonder built in 2550 BC 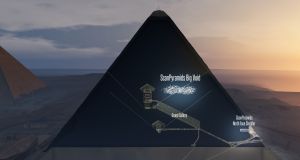 The Great Pyramid has been shrouded in mystery for millennia, but now a long-held secret of its structure might be known thanks to particle physics.

An apparent void lying undiscovered deep within the ancient Wonder of the World was found by scientists who had been mapping it using cosmic-ray based imaging.

The internal structure is located above the Grand Gallery, that links two of the Pyramid’s chambers, and traces a similar route for at least 30 metres, according to a study published in the journal Nature.

While the precise design and purpose of the space is unknown, it was hailed by the team of academics as the biggest discovery inside the Giza landmark since the 19th century.

Made under the watch of the Pharaoh Khufu and completed in around 2550 BC, the Great Pyramid, also known as Khufu’s Pyramid, served as the world’s tallest man-made construction for thousands of years. It is the sole survivor of the ancient Seven Wonders of the World.

How it was built has long been a bone of academic contention and there is no universal agreement about its creation.

To find out more about the Pyramid, researchers from countries including France and Japan began a project to scan the structure in October 2015.

They employed by-products of the cosmic ray known as muons that are only partially absorbed by stone and take noticeably different trajectories through air.

Detectors were set up inside the Pyramid, including in the so-called Queen’s Chamber.

This allowed the Pyramid’s insides to be visualised without physically disturbing it, as the results showed empty space differently from rock.

The presence of the void, dubbed the ScanPyramids Big Void, was confirmed using three different muon detection technologies over several months after first being spotted, the paper said. The results were then analysed three times.

Despite the breakthrough, the newly discovered structure has yet to be reached in person by any researcher.

Report author Mehdi Tayoubi said: “This structure is not accessible, we don’t see (that) people tried, if you look at the Grand Gallery, to access the void which is above.

“So this void was hidden, I think, since the construction of the Pyramid, it was not accessible.

“We needed this technique — the right technique at the right time — to be able to identify it and discover it.”

He added they were “very confident” the results were correct.

The finding opens up the possibility that the void could be linked to other different and undiscovered structures within the Pyramid, the study claimed.

Crucially, the authors said, it could provide a method by which scientists can finally start to piece together how the pyramid was built.

They added that the development “show how modern particle physics can shed new light on the world’s archaeological heritage”.

Muon detectors have previously been used to map out the inside of the Fukushima’s nuclear reactor in Japan and it is hoped they can be used to explore other archaeological sites. – PA