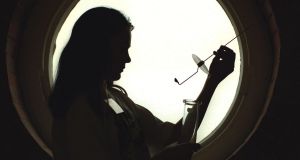 The BT Young Scientist and Technology Exhibition takes place from January 10th to 13th at the RDS in Dublin. File Photograph: Eric Luke

Concern about social issues such as homelessness, mental health and the problems faced by transgender people feature in projects submitted for this year’s BT Young Scientist and Technology Exhibition.

The 550 finalists for the 54th year of the educational event were announced this week, after an “unusually high” number of entries.

BT Ireland said an “impressive” 2,031 projects were submitted by students across the island of Ireland, with every county represented by a submission.

“An unusually high number of the 2018 exhibition entries investigate burning social issues such as homelessness, transgender rights and mental health,” the organisers noted.

“Whilst subjects such as these are not uncommon for the behavioural science category, this year the trend is visible in the more traditional categories such as biological and ecological science and chemical, physical and mathematical science, highlighting just how much these topics are impacting on students’ lives.”

Dylan Donohue (16), a transition year student at Adamstown Community College in Dublin, undertook a project on mental health among transgender people after a conversation with a friend about how they were feeling.

“I want to bring awareness to how difficult a trans person’s life can be and how acceptance and respect and support from other people can make their life so much easier,” he said. Dylan received 270 responses to a survey he devised for the project.

Saoirse Ward and Amy Coleman, both aged 15 and from Coláiste Mhuire in Galway, completed a project on the effects of alcohol on mental health.

“We saw an increasing amount of young people consuming alcohol and so we wanted to know why they are drinking and what effect it has on their bodies,” Sophie said.

While they are still working on the project, with the assistance of science teacher Geraldine Fallon, they distributed surveys to about 250 students in the school and have spoken to doctors and gardaí about the effects of alcohol.

One of the survey questions asked people if they knew what a unit of alcohol was. “Hardly anyone knew,” says Sophie.

“Our hope is that by showcasing how science and technology are in everything and how they play a role in our everyday lives, we will encourage more students to take part in the magic that is the exhibition.”

Minister for Education and Skills Richard Bruton said he had set the ambition to make Ireland’s education and training service “the best in Europe”within a decade.

“Key to achieving this ambition is ensuring that our young people develop analytical skills, critical thinking and creativity,” he said. “The BT Young Scientist & Technology Exhibition continues to make an invaluable contribution to developing these aptitudes in thousands of students across the country each year.”

The exhibition takes place from January 10th to 13th at the RDS in Dublin.

The overall winner for 2018 will represent Ireland in the European Union Contest for Young Scientists in Dublin in September.