On the bus around Europe with campaigning Irish scientists

Access science: ‘The idea is to engage people through hands-on workshops and activities that are accessible’ 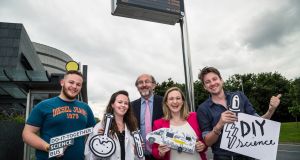 Getting ready for departure on the Science Bus were four of the five science bus drivers (captains) from Ireland; Stephen Davitt, Claire O’Connell, Aoibhéann Bird and Phil Smyth, with DCU president Prof Brian MacCraith in the centre at back. Photograph: Daire Hall 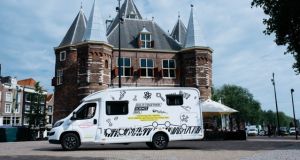 En route to the Wilde Mohre Festival in Germany

What happens when you load up a campervan with gear for science and engineering workshops, hit the road and travel around Europe, encouraging people to make their own yogurt, phone chargers and sunscreen and asking them about their local folk remedies?

The Do-It-Together Science Bus is finding out, and by the time it finishes its tour, no fewer than five Irish drivers will have taken the wheel.

“It is about getting the public involved in citizen science and ‘do-it-yourself’ science,” explains one of the Irish drivers, Dr Aoibhéann Bird, education and public engagement manager at the Insight Centre for Data Analytics at University College Dublin and Dublin City University. “The idea is to engage people through hands-on workshops and activities that are accessible to do.”

Bird and her partner Philip Smyth, children’s television broadcaster and head of public engagement at Cool Planet Experience, decided to throw their hats in the ring when they saw the Waag Society in The Netherlands was looking for enthusiastic science communicators to drive the Science Bus around Europe this summer.

Their short video impressed the judges and last month Bird and Smyth took over driving duties from fellow Irish physicists Claire O’Connell and Stephen Davitt from DCU. “We started driving the bus from Amsterdam, but we were planning the route and workshops for months before that,” says Smyth.

Their route saw them trundling through Germany and into Poland and the Czech Republic, stopping off at the Wilde Möhre Festival in Drabkau and the “Long Night of the Museums” in Berlin.

The campervan acted as a base for workshops that invited people to make stuff. “We had people making their own yogurt, building a phone charger powered by a bike, they were making sunscreen and soap,” explains Smyth. “A lot of it was about empowerment too – we started people off but they would help each other with the procedures, and we spoke about the history of what people were making. We wanted to make sure there was a sense of ownership and pride in what they did.”

As well as hosting the “travelling suitcase” workshops, the two Irish scientists also asked participants about local folk remedies or ‘life hacks’. Among others, they heard about using papaya on cuts, crushed leaves of Plantago lanceolata (English plantain) to soothe bee stings and a dilute solution of sage, lavender, tea tree and clove oils to keep insects at bay.

“These are the kinds of things that maybe your granny might use to help you if you were sick, and when you go looking there is actually quite a bit of scientific research that explains why they work, but there’s a danger of these things being lost through generations,” says Bird. “So we wanted to record them from the locations that we visited, and by the time we left we had 48 in the book.”

For Smyth, one of the lasting memories of the Science Bus, which receives funding through the Horizon 2020 programme, is the welcome that the Irish scientists got. “It was brilliant seeing the enthusiasm from adults and kids, they loved that we are from Ireland.”

The couple handed back the keys to the van in late August (keep an eye on their Twitter accounts @phildublin82 and @aoibhywavy for more uploads from the project) and Irish involvement continues as Mark Langtry takes to the road with Dutch co-captain Charlotte Jansen bound for Germany, Slovenia, Italy, France and Spain.