Euler and the failed fountain of Sanssouci

That’s maths: Frederick the Great ignored the advice of a genius in maths and physics 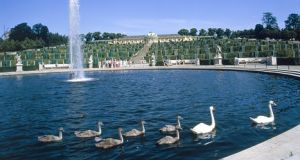 Sanssouci Palace in Potsdam, Germany, now with its fountain

When Frederick the Great was crowned King of Prussia in 1740 he immediately revived the Berlin Academy of Sciences and invited scholars from throughout Europe to Berlin. The most luminous of these was Leonhard Euler, who arrived at the academy in 1741. Euler was an outstanding genius, brilliant in both mathematics and physics. Yet, a myth persists that he failed spectacularly to solve a problem posed by Frederick. Euler is reputed to have bungled his mathematical analysis. In truth, there was much bungling, but the responsibility lay elsewhere.

Frederick wanted to construct a fountain at Sanssouci palace in Potsdam, with a 100-foot jet of water pumped up from the River Havel far below the gardens. The engineering challenge was formidable but feasible given the right materials and design. Various options for raising the water were possible: steam power, water wheels, wind mills and even horse power.

Work on the project started in 1748, but years of effort produced only failures. In the first designs, the pipes were square in cross-section and made from flat wooden planks bound with metal straps. These burst almost immediately. Then hollowed trunks were tried, with no more success. The “fountaineers” were inexperienced in hydraulics and insufficiently skilled to do the job.

By the outbreak of the Seven Years War in 1756, when the project was suspended, almost nothing had been achieved. It was resumed in 1763 but the fountain was not completed until 1843, almost a century after the initial attempts, when success was achieved using steam pumps and cast iron pipes of 10inch diameter.

After the initial fiasco, Frederick asked Euler to calculate the hydraulics of the fountain. At that time it was believed that the height of water above a point determined the pressure there. Euler showed that the pressure at the lower end of the pipe would be greatly in excess of this. A pipe to raise water 60 feet would have to withstand pressures more than five times greater than the weight of the water column.

Euler found that the pumps were too powerful for the wooden pipes. He concluded that the project would be feasible only if metal pipes, not wooden ones, were used. Less powerful pumps “would be unable to deliver even a drop of water”. Euler warned the King that the proposed scheme was doomed to failure.

Euler’s analysis was a mathematical tour-de-force. It made clear to anyone competent to study it that great strength would be required in the lower sections of pipe. The planned scheme was hopeless because the men employed had no relevant experience and the wooden pipes were not up to the job. Had “Old Fritz” not been so stingy with funds, cast iron pipes might have been used.

Euler was mocked by the King, who misunderstood or misinterpreted Euler’s conclusion. In reality, the problem lay with the design and not with Euler’s mathematical analysis, which was sound. The project was mismanaged by a succession of incompetent engineers who used wooden pipes and powerful pumps that caused them to burst.

Frederick was contemptuous of scientists in general and of Euler in particular. He blamed Euler – whom he called his Cyclops – for the failure of the fountain project. But Frederick knew nothing of mathematics, preferring art and philosophy over science. In 1766 Euler left Berlin for St Petersburg.